Sign of Freedom, Best Seller of the 2017 Hanoverian November Auction 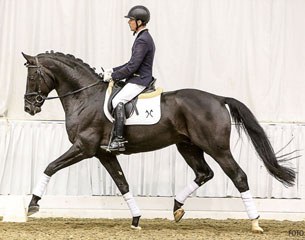 Sign of Freedom became the best selling horse at the 2017 Hanoverian Winter Auction held in Verden, Germany, on 11 November 2017. The 8-year old licensed and performance tested stallion sold for 57,000 euro.

Sign of Freedom is bred and owned by Karlfried Rennergarbe and is by Sandro Hit x Hohenstein. He sold to Spain.

Ninety-four horses were presented for auction and eleven sold for more than 25,000 euro. Pretty much all best selling horses were jumpers!

The most expensive show jumper at the auction was Camara (by Casino x Grannus). He sold for 44,000 euro to a local yard. The 5-year old stallion Cello (by Commodor x Cassini II) fetched a price of 40,000 euro.

The average price for a horse at this auction was 15,648 euro.