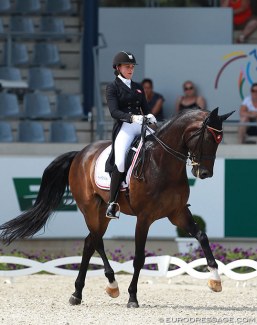 Danish Olympic team rider Anna Kasprzak had to say goodbye to her first Grand Prix horse Select Ecco, who was euthanized on 19 March 2018 at age 19.

"We had our Grand Prix debut together nine years ago, and he taught me so much," said Kasprzak. "Together with Victoria Vallentin he had some good years and results in the U25 league. For the last 1,5 years he has enjoyed his retirement together with us. Sadly we had to put him down because he suffered from laminitis."

Select was a 1999 born Oldenburg gelding by Sandro Hit out of Annabell (by Grundstein).

Hanni Toosbuy Kasprzak acquired Select as a young horse and Anna made her national show debut on him in 2007. They did their first internationals at Young Riders' level in 2008 and won the 2009 Ecco Cup Finals in Denmark at Under 25 level. Anna ended her Young Riders' career on Blue Hors Future Cup in 2010 and Select carried her on to Under 25 Grand Prix level.

Between 2011 and 2013 Select was not internationally competed but Anna did his last national show on him in November 2012, after which Mille Larsen Warncke briefly showed him. In October 2013 Select made his come back to the international show arena as a schoolmaster for Victoria Vallentin, first at Young Riders level and in the summer of 2014 at Under 25 Grand Prix level.

Vallentin and Select competed at a number of U25 shows between 2014 and 2016: Aachen, Malmo, Odense, Nieuw en St. Joosland, and Odense. They won the 2015 Ecco Cup Finals at Under 25 level. The pair and the horse's last competition was the CDIO-U25 in Braunschweig in February 2016, where they finished 9th.