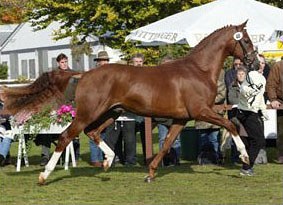 After having been sold and moved to Canada little over a year ago, the 17-year old Hanoverian licensed stallion Royal Blend has now passed away.

Royal Blend was a 2001 born Hanoverian bred by Reinhard Grothmann and previously owned by the Celle state stud. He was by Rotspon out of Lena (by Lauries Crusador xx x Grande x Duellant).

Licensed at the 2003 Hanoverian Stallion Licensing in Verden, he did the 300-day stallion performance testing in Adelheidsdorf one year later and scored131.61 points to finish second out of 42 participating stallions. He earned 137.31 points for dressage and 107.19 for show jumping.

Trained and competed by Susanne Ersil, he was first shown in January 2005 in the riding horse tests and won the 2005 Hanoverian Young Horse Championships. At the 2005 Bundeschampionate he became reserve champion. In 2008 he competed at the World Young Horse Championships and landed 12th place. At the Bundeschampionate four weeks later he was 21st in the second round.  At age 10 the stallion moved up to S-level and stuck to small tour level with his last show being in October 2012.

In January 2017 Royal Blend sold to Markus Wüthrich and moved to Sigma Warmbloods in Canada.  Royal Blend passed away at the end of March.

"Just over a month ago, Royal Blend passed while out in the paddock," the Canadian owner told Eurodressage. They did not want to disclose the cause of death.