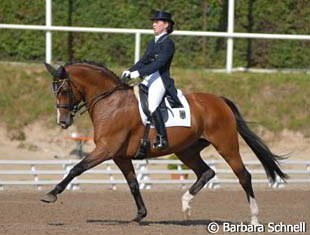 The now 30-year old Van der Linde had a stellar career as a junior-young rider in the mid 2000s.

Aboard the Dutch warmblood mare Mitchell (by Inspekteur x Zonneglans), which the Van der Linde family purchased from Marian Dorrestijn and Hennie Broekhuijzen in The Netherlands, Verena was a ruling international junior/young rider between 2004 and 2007.

The pair won silver at the 2006 European Junior Riders Championships in Stadl Paura, behind Diederik van Silfhout. At the 2007 European Young Rider Championships they were seventh in the Kur.

In 2008 Mitchell sold Anne Ellersmann first and then in 2009 to Stefanie Rothenberger as a schoolmaster for her daughter Nicola Krause. Krause won team gold on Mitchell at the 2009 European Junior Riders Championships in Ermelo.

Van der Linde has not competed internationally since her last ride on Mitchell. She and her sister Carolin manage a small dressage stable in Hamminkeln, Germany, and are still active at regional, German level. Her top horse at the moment is the 11-year old Hanoverian Dschibuti (by Dancier x Wild Dance).