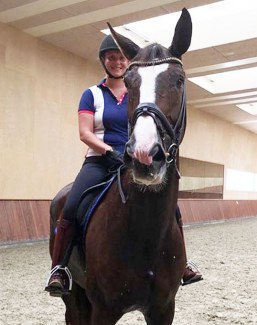 Bred by Josef Greten, Patrik is by De Niro out of Egoistin (by Rosario x Feiner Stern x Harlekin). He is a full brother to the Oldenburg Licensing Champion Don Deluxe.

Kasprzak acquired the horse during her pregnancy. She gave birth to her first baby, Ella, on 10 May 2018.

"We bought him while I was still pregnant so today (31 May) was the first ride on him," said Kasprzak. "Luckily he feels just as amazing as he looks!"

Back in the saddle, Kasprzak is heading straight to the 2018 Danish Dressage Championships which will take place in Broholm on 8 - 10 June 2018. She will be competing her 10-year old Westfalian gelding Rock Star (by Rock Forever x ) in the Grand Prix Championship.

"It feels so good to be back," Anna told Eurodressage about her show plans. "I’m not super fit yet, but Rocky is great right now so we will just give it a try."