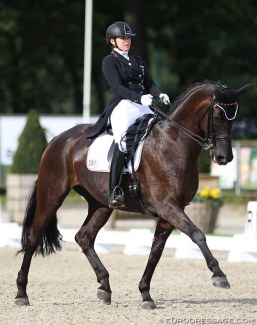 First Lady is a 12-year old Baden Wurttemberger bred mare by Florencio out of Sweet Dream (by Donnerhall).

The Abbelen family acquired First Lady in 2013 as a second iron in the fire alongside Anna's 2014 European Junior Champion Furst on Tour. They made their show debut at the CDIO-PJYR Hagen "Future Champion" in June 2014.

After the sale of Furst on Tour to Hong Kong, Abbelen got the attention of the German selectors with First Lady and qualified on the team for the 2017 European Young Riders Championships in Roosendaal, The Netherlands. The pair won team gold and double individual silver. It was also their last show together.

Henglein made her debut on First Lady in June at a local show in Herrieden. One week later they contested the regional show in Babenhausen, where they won two M-level classes.

Abbelen will continue her dressage career as an Under 25 rider with Henny Hennessy. She also has the 5-year old Rhinelander bred Fürst For Me (by Furst Piccolo x Don Bedo).

"I had the best time with Lady and achieved more than ever thought," said Abbelen. "Eileen perfectly fits on her. We had never bought her with a view on Grand Prix, just as another junior-young rider horse."