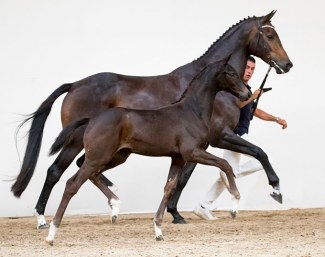 Colt Navarone (by Trafalgar x Apache) achieved a knock down price of 15,000 euro, while No Nonsence Texel (by Totilas x Krack C) sold for 11,000 euro

“Last year we had a record breaking auction with the dressage foals, which created a challenge to equal it this year. We are very pleased that we have been able to realize such a successful auction again, with almost the same average price," said Prinsjesdag chairman Arjan van der Waaij about the auction.