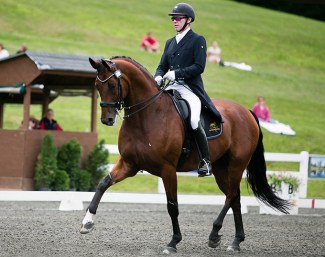 Trained by David Collins, who is based at Centerline Stables near New York, U.S.A., Bojing is an 8-year old Hanoverian by Benetton Dream x Wie Weltmeyer.

Collins first competed the bay gelding as a 4-year old in 2014 and placed 11th at the 2014 U.S. Young Horse Championships in Wayne, ILL. In 2015 the pair made it to the U.S. Dressage Finals at Training Level.

Collins consistently competed the gelding up the levels and in 2017 they began showing at regional small tour level. Their last recorded results are from August.

Schmidt discovered Bojing at a Frank Henning Old Masters clinic at Avalon Farms on 8 September 2018, where he was the keynote speaker and in which Collins rode Bojing.