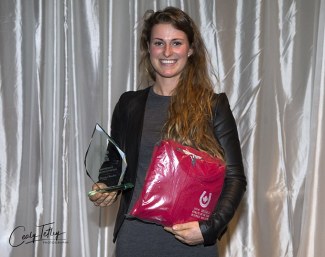 Beatrice Boucher was named Dressage Canada's Athlete of the Year 2018 after a successful 2018 season riding Delfiano.

Equestrian Canada (EC) honoured outstanding dressage athletes, horses, owners and volunteers at the EC Dressage Awards Reception, which was held in the Tanbark Club at the Royal Horse Show in Toronto, ON, on Nov. 6, 2018.

n their second year of partnership, Boucher and Gilles Bergeron’s 15-year-old Hanoverian gelding Delfiano (by Del Piero) made a strong impression at the 2018 Global Dressage Festival (AGDF) in Wellington, FL. The pair’s AGDF highlight came in the CDI-Y Individual Competition on March 17, where they danced to a score of 68.725% for first place.

Boucher’s most remarkable achievement of 2018, however, was her strong, consistent performances at the 2018 North American Youth Championships in North Salem, NY. There, she battled the best of her peers from across the continent to claim a spot on the podium in each of her three classes in the Young Riders division.

Boucher and Delfiano kicked off the competition by scoring 68.471% in the Team Competition, contributing to Team Quebec/Alberta’s impressive total score of 201.145, which won the gold medal on Aug. 1. Next, Boucher captured two individual silver medals, starting with the Individual Competition on Aug. 3, in which she scored 71.029%. On Aug. 5, Boucher returned to the ring to close her season on a personal best score of 72.800% in the Freestyle for her second silver medal.