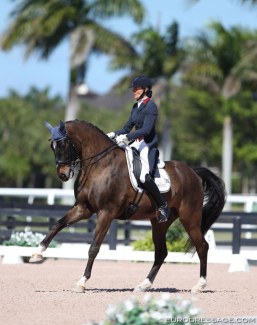 The circle is complete for Charlotte Jorst's small tour horse Ray Dance. The 10-year old Westfalian gelding has been sold back to Germany and has returned in training with his original rider, Ann-Christin Wienkamp.

Ray Dance is by Rock Forever x Van The Man and is bred by Elke and Stefan Surmann.

He was first competed in Germany as a 3-year old by Rebecca Holtwiesche but Wienkamp took over in 2014 and placed fourth with him at the Bundeschampionate in Warendorf. Their last show was at M-level in 2015.

Danish born American Charlotte Jorst purchased Ray Dance as a 6-year old. He was initially a stallion but was gelded to focus on sport. The new duo made its international show debut at small tour level at the 2017 CDI Burbank and competed at that level for two consecutive years.  They finished 12th, 7th and 12th in the three rounds of the 2018 U.S. Small Tour Championships.

Instead of taking the horse up to Grand Prix, Ray Dance was swapped in a big sales transaction at Andreas Helgstrand when Jorst acquired Zhaplin Langholt, Atterupgaards Botticelli and Grand Galaxy Win in October 2018.

Ray Dance was for sale in Denmark and now found a new owner in Germany. Ann-Christin Wienkamp is back on board the horse. They made their return show debut at the local show in Greven on 9 - 10 March 2019. They placed 6th in the S* class with 70.397%