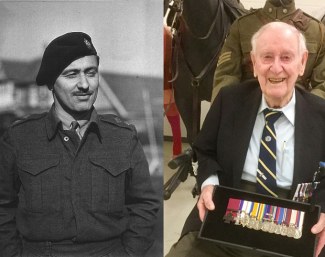 Equestrian Canada (EC) extends heartfelt condolences to the family and friends of Lieutenant-Colonel (retired) William “Bill” Dalton Little, MC, CD, of Ottawa, ON, who passed away peacefully on April 21, 2019, at the age of 99.

Little was born in Selkirk, MB, to Frederick and Helen (née Norquay) Little. He began developing his equestrian expertise serving part-time with the Canadian Militia’s mounted cavalry unit, The Fort Garry Horse, in Winnipeg, MB. Little's military career spanned several decades, and his heroic actions during World War II in St. Aubin-sur-Mer, FRA, on D-Day and in Hoogerheide, NED, earned the Military Cross for bravery and the Canada Forces Decoration, as well as the Legion of Honour from the President of France. For further details on Little’s incredible military career, please read this history courtesy of The Fort Garry Horse Museum and Archives.

Upon his retirement from the military, Little returned to his equestrian roots. He served as Executive Director for the Canadian Horse Council, and was then appointed Competition Director for equestrian events at the 1976 Montreal Olympic Games.

“Montreal was only allocated the Games in 1974; we had to build everything from scratch and needed a manager who wasn’t afraid of hard work,” said Roger Deslauriers of Bromont, QC, Venue Manager at The Bromont Olympic Equestrian Park. “Bill was a very hard worker, and always pulled his socks up to get things done, whether it was planning the cross-country course or building show rings. I remember we had meetings at six every morning and nine every night during the Games to solve the problems that came up that day and those that would come up tomorrow. He always had a good attitude; his positive nature was his greatest strength.”

Based on the success of the Games, Little was selected as the first Executive Director of the Canadian Equestrian Foundation (CEF) in 1977.

“The industry had trust and faith in his capabilities because of his already-demonstrated leadership skills,” said Cara Whitham of Campden, ON, a retired FEI 5* Dressage Judge who knew Little through her time as CEF Director of Dressage. “I found him very friendly, knowledgeable, and an outgoing person who always had the Canadian equine industry as a priority in all of his dealings.”

After his retirement from the CEF in 1984, Little continued to lend his immense talents in service to the equestrian world. In 1986, partnered with Hans Pracht (GER) and reunited with Deslauriers, he helped make history by drawing the World Dressage Championships out of Europe for the very first time to bring the competition to Cedar Valley, ON.

Personable and diplomatic, Little’s knack for resolving conflict and building relationships facilitated immense progress for equestrian sport in Canada. Furthermore, his unparalleled work ethic and great sense of humor made him deeply loved and admired by all who had the good fortune to know him.

“It is with great sadness that I learned of Bill’s passing,” said EC CEO, Richard Mongeau. “He set a strong example of leadership in our community, and established a foundation of excellence with the Canadian Equestrian Federation that has continued into Equestrian Canada today.”

Little is survived by his daughter, Sandra Tryfon; son-in-law, Andreas Tryfon; grandchildren, Nicholas, Yiannis and Alexia; and great-grandchildren, Andreas, Thea, and Alexandra. In lieu of condolences, please consider making a donation to Canadian Guide Dogs for the Blind.