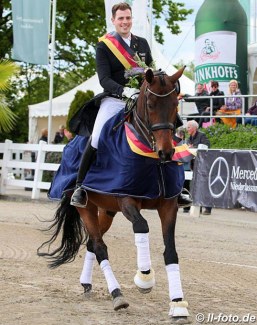 Frederic Wandres broke Heiner Schiergen's long-time subscription to the title of German Professional Dressage Champion. Wandres participated for the first time at the National Championships for Professionals in Unna-Massen on 10 - 12 May 2019 and persevered.

It was the 25th edition of the "Berufsreiterchampionat" and for the sixth time it was held at equestrian centre Massener Heide in Unna, Germany.

The German Professional Dressage Riders Championships consists of three rounds: the Grand Prix and the Special after which the three best scoring riders move to a Finals with horse change and ride a short Grand Prix test on each other's horses.

A head rider at Ullrich Kasselmann's yard in Hagen, Germany, Wandres steered Saskia Bauer's 14-year old Westminster (by Weltissimo x Davignon) to victory. The combination was second in the Grand Prix (71.033%), won the Special (72.386%), and in the Finals with horse change scoring a total of 2326 points after three rides in the Short Grand Prix test on his own horse as well as on the two other finalists' mounts, Aaron and Download.

Heiner Schiergen had been the Profi Champion four times in a row, twice already on the 14-year old Belgian owned stallion Aaron (by Florencio x Record), but his third attempt on Aaron led to silver this year. The pair won the Grand Prix with 72.633%, was second in the Special with 72.124% and second in the finals with horse change on 2312.50 points.

Back on the podium with bronze like last year was Ants Bredemeier on Rainer Kraupner's 12-year old Oldenburg bred Download (b yDon Frederico x Sunny Boy). Shee was third in the Grand Prix (70.933%), fourth in the Special (68.889%) and third in the horse change finals with 2273 points.