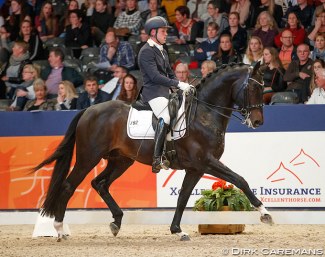 The 8-year old Grappa is by Fidertanz x Special D and bred by Jolanda Woudsma, who co-owned the dark bay stallion with Aris van Manen.

The stallion was KWPN licensed and completed his performance test in 2015 with a score of 76.5 points after missing out on the 2014 autumn testing due to a skin infection.

Initially trained by Adelinde Cornelissen, Grappa moved to Jean-Rene Luijmes in January 2018, who took him to small tour level. The horse competed in the Pavo Cup qualifiers and KWPN stallion competition circuit, but never did a CDI. Under Luijmes the stallion won bronze at the 2018 Dutch Dressage Championships at M-Level (ZZ-licht).

Luijmes reported on Facebook that Grappa alongside his second horse Day Dream, are moving to Haras de Tuilerie. The yard is run by Nicolas Defois and Laura Vandeputte. The stallion is meant as a ride for the owner's daughter.