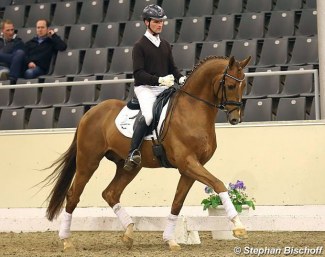 German dressage rider Philipp Hess has been invited as the guest judge rider for the 2019 Pavo Cup Finals in Ermelo, The Netherlands, on 16 August 2019.

Philipp Hess, son of the 4* dressage judge Christoph Hess, is a young professional rider has gained much respect and acclaim as a test rider at the Bundeschampionate as well as at the German stallion performance tests.

At the 2019 Pavo Cup Finals, Hess will be joined by German Under 25 team trainer Sebastian Heinze who will provide commentary on Hess test riding the finalists.

"For the audience it will be incredibly educational not only to see what they are doing, but also to hear why they ride a horse in a certain way. We hope to give an extra dimension to the Pavo Cup Finals with this guest rider, so that the people do not only see the most talented Dutch warmbloods, but also learn about training a young horse," said KWPN inspector Floor Dröge.

The Pavo Cup Finals are the Dutch warmblood young horse championships, organized by the KWPN society.