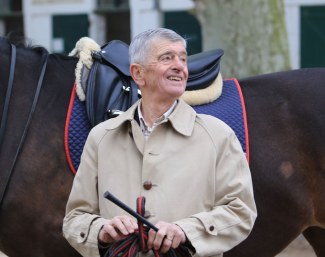 Guest column of this week if by a regular contributor, Colonel Christian Carde.

Carde joined France’s prestigious equestrian institution “Cadre Noir” in 1965, after which he turned to the discipline of dressage.
From 1976-1982 he competed internationally in dressage with Solitaire. Between 1978 and 1980 he was a member of the French dressage team which came second in Aachen in 1979. In the same year Christian Carde won the French dressage championships. A French national dressage coach from 1985-1989, Carde was the Ecuyer en chef of the Cadre Noir from 1991 until his retirement in 1999 after which he judged a short time internationally. He now spends his retirement training horses and riders in North America and Europe.

Letter to a Befriended Judge

You claimed that I do not like dressage competitions. This assumption is right, but at the same time it is not. It is not because I owe to dressage competitions probably the best moments of my life as a rider and thanks to them, too, I was entrusted with eminent and fascinating job functions.

Being selected for international competitions, Olympic Games as well as representing your country at European and World championships  gives you great joy and leaves you unforgettable memories. I cherish the moments of having competed in Aachen several times and receiving my ribbons from Colonel Nyblaeus, at the time the president of the FEI Dressage Commission and a lord of this sport. The Aachen Farewell of the Nations with thousands of people standing, waving white handkerchiefs is an immense emotion shared between the public and the riders in the stadium; all this to the sound of the German folk song „Muss I denn zum Städtele hinaus“. Just to mention it makes me emotional. I recollect the days when a priest, who was also an international judge, celebrated mass on the competition grounds in Belgium in between two tests ....

So it's true, dear friend, I loved competitions. It aimed to be as much an academic as an athlete. The German school, precise and serious, certainly dominated it, with the French school more lively, perhaps, but less exact.

Nowadays I consider it difficult to find again what I loved so much yesterday. The riding I see there is a uniform one, with just a few exceptions. It struggles to show horses that obey willingly and without hesitation; that respond to the aids calmly and with precision, displaying a natural and harmonious balance both physically and mentally (Article 401-4). Instead Dressage has drifted too often towards the spectacular.

The FEI rules are only slightly modified from its origins, yet competitions suffer from a very questionable application. The rule-book was nevertheless adapted to the evolution of the current practice by removing what was too difficult for the majority of riders or too inconvenient (dare I say boring?) for those who seek making dressage more popular and therefore a flourishing business. Remember, for instance, the disappearance, of the paragraph which stipulated that it is the walk which made the imperfections of dressage most evident. At the walk, the Queen of Gaits!

I continue with the contact, which is always supposed to be soft, light and mainly achieved through the bridoon, with the poll being supple … (article 401-5). Most recently I was at the 2019 CDI Saumur in April and I mainly see horses held firmly, the mouths shut by cavessons tightly closed. The majority has forgotten lightness for various reasons. Lightness which is THE "mark of the high school!"

Modern training methods leave me even more skeptical, and I find it distressing that the barbaric hyperflexion of the neck, in complete opposition to the FEI Code of Conduct, still allows some to win at the highest level. And this is even more severe and questionable because there are also riders who train their horses correctly and show something in positive opposition of what I described before.

However, I want to be optimistic. In a letter he sent me, French dressage trainer René Bacharach once quoted Gide: "The world will be saved by a few". May he be right!

In this optimistic perspective some examples spontaneously come to my mind. Also in Saumur I saw some beautiful riding and I see in some international top riders the subtle and easy looking „marriage“ between impulsion and flexibility of the joints. This leads to a horse's obedience in lightness because they are in muscular harmony and not in provoked tension. It is rare to see, but the correctness of this riding also allows these riders and horses to be at ease in the arena.

So, dear friend, this is my conviction: either our time will produce more and more riders like those I mentioned above, with a kind of riding that develops by sticking to the spirit of the dressage rules and the FEI Code of Conduct. Otherwise the competition of Dressage will die one day for not having been able to preserve the equestrian art from the alterations (article 419) which it will face by the incompetence of men or their ambitions. This is not a possibility, but a certainty!

And it is you, the judges, who will decide whether or not to finally separate the wheat from the chaff, so that dressage competition continues to live respecting the fundamental principles of riding and in the the physical and mental integrity of the horse.