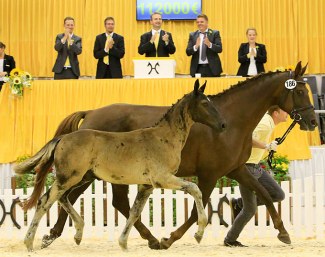 Derby became the top seller of the 2019 Hanoverian Brood Mare and Foal Auction, held during the Verden International CDI competition on 9 - 10 August 2019.

Derby (by Dante's Junior x Fürst Romancier) sold for no less than 112,000 euro to a syndicate of stallion owners (Kemper, Klieber, Carvallho, Pistner and Schubert) and was the clear price highlight of the auction.

Bred by Marion Menck, Derby already had an opening bid of 30,000 euro on the telephone.  "You don´t get one like him every day," said auctioneer Bernd Hickert enthused. The bids were raised while the enthusiastic audience cheered for each of them. When the hammer fell at 112,000 Euros, the typey black colt was bid farewell from the auction round with standing ovations. He will grow up at a group of well-known stallion raisers and be prepared for future tasks.

The jumping foals had their big show the evening before on 9 August 2019. In their pedigrees everything with a big name on the international show grounds of the world met. This was also true for Chaccon du Rouet (by Chacoon Blue x Balou du Rouet (breeder and exhibitor: Gerd Janssen, Neuschoo), who was the top prized horse on Friday with 17,500 Euros. His new owner had already payed attention three years ago. That time he acquired Starena (by Stalypso), who became champion mare at the Herwart von der Decken-Show this year.

The second most expensive foal at this auction was the filly Valissa (by Valverde x Belissimo M) which sold to Gut Schönweide for 40,000 euro.

The colt Finest Prince (by Finest x Londontime) will also stay in Germany for 31,000 euro, while the filly Tassi vom Heidberg (by Tesla x De Niro) moves abroad for 29,000 euro.

One hundred and twelve foals were sold at this auction and they achieved an average price of 9,116 euro. Thirty foals moved abroad, They were most popular in Great Britain, where six of them selling to the U.K.

"We are delighted that the breeders have entrusted us with the marketing of outstanding foals and that this has been rewarded by the international buyers", said auction manager Jörg-Wilhelm Wegener.