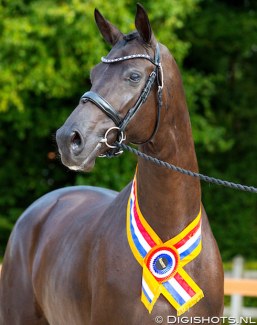 Lolana (by Galaxie x Vivaldi) has been named the KWPN Mare Champion of 2019 at the KWPN Championships in Ermelo, the Netherlands, on Friday 16 August 2019.

Eleven mares were invited to the champion's ring at the end of the day. The G-crop of stallions dominated this year's Mare Championship as no less than 7 out of 11 were sired by G-stallions.

The mares were judged by Toine Hoefs, Henk Dirksen and Bart Bax.

The winner was Lolana, who is by the now French owned Galaxie out of elite mare Dolana (by Vivaldi). Bred by Appie Dijkstra and owned by Leen van der Graaf and Yvonne van Vliet, Lolana was praised for her great movements, sufficiently long topline and musculature. She stood out with her suppleness, relaxed way of moving and good walk.  Breeder Appie Dijkstra celebrated an incredible double whammy at the KWPN Championship as he also bred the KWPN Foal Champion, Oristo!

The third ranked mare was Lillyfee (by Toto Jr x Ziesto). She is bred by I. Ahne-Schillemand and owned by MT Stables in partnership with Louis and Gabrielle Röst. The mare is built in an uphill way and moves with much technique and suppleness, but could be muscled a bit more in the hindquarters.