The Dangers of Sleep Deprivation in Horses 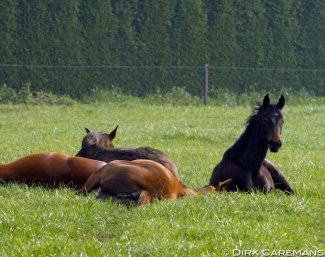 Sleep is essential for life. The quality and quantity of a horse’s sleep directly affects their health and well-being. However, sleep is rarely considered as part of a horse’s management plan. A new study has found that poor management or physical problems can lead to horses becoming sleep deprived and at risk of serious injury.

Sleep is a naturally occurring state involving both the body and the mind. While there is still a lot to be learnt about the complex function of sleep, it is performed by almost every species and is vital for the performance and well-being of an individual.

Physiologically, during sleep, the individual enters a state of temporary unconsciousness and their muscles become inactive and relaxed. In the behavioural sense, the animal will seek a sheltered environment, adopt a certain posture and stop responding to external stimuli.

There are three stages of physiological sleep and horses can achieve stages one (light sleep) and two (slow wave or deep sleep) while standing up. However, the third stage – rapid eye movement (REM) sleep – occurs only while the horse is lying down due to the complete muscle relaxation required. Previous research has shown horses can achieve REM sleep in both sternal (with their head supported on the floor) and lateral recumbency.

If horses don’t lie down for any reason, REM sleep deficiency (recumbent sleep deprivation) occurs. As a result, horses may fall into REM-sleep while standing, which consequently causes them to collapse due to the associated muscle relaxation. These collapses can cause severe injuries.

Christine Fuchs and her team of scientists at the Ludwig-Maximilian-University of Munich, Germany set out to research sleep deprivation in horses. She presented their findings at the 14th International Society of Equitation Science (ISES) conference in Rome in September.

To find subjects for the study, the research team recruited owners whose horses had shown signs of collapsing from readers of a German equestrian magazine. A detailed online questionnaire was completed by 177 respondents.

The research team visited 36 horses with collapses in their home environment and seven healthy, control-group horses. Each horse had a clinical examination, was observed for 24hrs and their management, stabling conditions and medical histories were documented.

Each horse was also fitted with a mobile sleep laboratory to take polysomnographic readings for the 24hr period. Polysomnography is a diagnostic tool that measures physiological functions during sleep. It simultaneously measures several body functions such as brain activity (electroencephalogram or EEG), eye movements (electrooculogram or EOG), and muscle tone (electromyogram or EMG), with which the depth and quality of sleep can be determined.

The results of the study provide important information.

The main causes of the lack of recumbent sleep were issues with the horse’s management or pain from a physical problem.

The online questionnaire showed a significant correlation between a change in the horse’s management or environment and their first collapses.

A third of the horses visited did not have enough space, according to the German guidelines for box stall dimensions.

In half of the horses visited, the onset of collapses was directly related to an event – a management change for example, a change of stable or a physical condition, such orthopaedic problems.

The examined horses collapsed a minimum of four and a maximum of 199 times during the 24hr observation period. The individual number of collapses depended significantly on how much that horse had laid down.

The horses who did lie down to sleep showed significantly fewer collapses.

The horses who collapsed had an altered and a very restless sleep profile – they spent notably less time in REM-sleep compared to those who did not collapse. Their REM sleep phases were shorter, they occurred while they were standing and in over 86% of cases were during, or immediately before the collapse.

Some of the horses in the study were not only suffering from physical issues but also from psychological problems. Stereotypic behaviours like weaving, cribbing and box walking were present in 25% of the horses from the questionnaire. Of the examined horses, eight demonstrated altered behaviour after their collapses had begun – some became listless and others extremely anxious.

Two years after the assessments were made, seven horses from the study have been euthanized due to injuries or behavioural problems supposedly caused by the sleep deprivation.

Given the importance of sleep, it is clear that REM-sleep deprivation leads to behavioural changes and related collapses can cause severe injuries. Treatment for the condition should involve identifying the reason of the horse’s reluctance to lie down, treating any underlying medical conditions and optimising their environment and management.

“We were amazed and shocked at how many horses seemed to suffer from these kind of collapses. Initially, we thought we might find 10-20 horses. To date, approximately 300 horse owners have contacted us and sought our advice.”

“It is amazing how easy it is to help some horses and how frustrating and difficult it can be to help others. The challenge is that every horse suffering from recumbent sleep deprivation is an individual and has its individual ‘reasons’ why it does not lie down.”

“Horse owners need to be aware that the sleeping behaviour of horses is an important thing to consider. It is important to recognize the symptoms as soon as possible but prevention is essential.”

“It was conspicuous that most horses seemed to have a problem after a change of stable. This is one thing we are looking at in a future study, especially the moving from a stable to an open communal barn. Open barns are obviously the most appropriate housing type for horses, but unfortunately, many of them have bad management and horses that were living in a stable for many years might not be able to cope with it.”

From Hon President of the ISES, Janne Winther Christensen:

“It was great to see this important subject being researched. Sleep is important for the welfare and performance of horses, and it would be very valuable to see more research on the various factors that influence sleep and sleep deprivation, for example, box sizes, flooring and bedding material, and the social environment. In nature, horses sleep within visual contact of each other and usually one horse remains standing whereas in the domestic environment, horses often sleep in single boxes with solid box walls where they are unable to see their neighbours while lying down.”