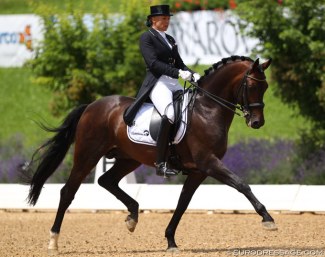 Fahrenheit is by Fidertanz out of Daylight Dance (by De Niro x Noble Roi xx) and bred by Andrea Heitmann.

He was first competed as a youngster by Nicole Teichmann and Lena Waldmann, with Anja Plonzke showing him briefly in 2012. In 2014 Tannenhof's new head rider Leif Hamberfer took over the ride and trained the horse up to Grand Prix level. He competed the horse in the 2015 Nurnberger Burgpokal Finals and prepared him for the Louisdor Cup but in 2017 Plönzke took him back and Hamberger left Tannenhof.

Plonzke has been competing Fahrenheit since June 2017 at national Grand Prix level and in May 2018 they made their international GP debut in Munich. Since then they have showed in Wiesbaden, Fritzens, Munich, Hagen and Mannheim. Their last CDI start was in June 2019 at the CDI Wiesbaden, where they were second in the Grand Prix (71.326%) and third in the Freestyle (76.730%).

As a breeding stallion, Fahrenheit sired two licensed sons (Flynn and a nameless one) and three State Premium Mares. His oldest offspring dates from 2011. In 2016 he sired the German Filly Foal Champion, an Oldenburg registered Fahrenheit x De Niro filly, bred by Charlotte and Heinrich Hentemann.

Fahrenheit has been gelded so he can be focused fully on sport.

"We had to decide for the welfare of the horse and choose between sport or breeding," Anja Plönzke told Eurodressage. "He became too stalliony. At shows it was difficult for him. He was unsettled in the box, couldn't catch enough rest and was only thinking of covering. We collected a lot of semen before he was gelded so that the breeders can still use him. We know it's a bit more difficult with frozen than fresh, but it was for the wellbeing of the horse that we decided this."

The veterinarians have said that it can take up to half a year before a stallion, gelded at a later age in life, gets more settled. "I'm looking forward to our next show and see how it goes," Anja added.