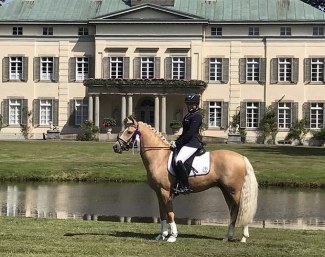 Gorgeous, talented 5-year old German Riding Pony with three very good gaits. Mr Roody is successful and has been placed in dressage tests up to A-level as well as in riding horse tests. He was a Bundeschampionate finalist in 2017 as a 3-year old as well as competed at the 2018 Bundeschampionate as a 4-year old.

This exceptional pony is truly a very talented and beautiful dressage pony, which has proven his talent and potential in competition. He has been victorious in riding horse tests and dressage tests Kl.A. His expression and appearance in the arena draw the attention of the audience.

An absolute star for the future and on his way to becoming an FEI pony level, training the L-level movements for a future at the highest level of pony sport.

This beautiful pony will only be given in very good and loving hands in which his education is guaranteed.