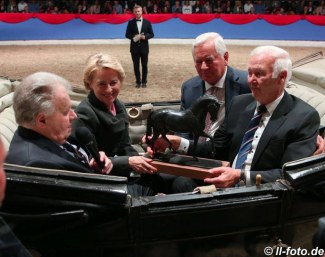 Uwe Heckmann became the recipient of the Gustav Rau Medal for his life time achievements at the Oldenburg Gala Evening on Friday 4 October 2019 in Vechta, Germany.

Heckmann has been closely connected to the Oldenburg Breeding and Auction centre in Vechta for 40 years now and this anniversary was celebrated with two special accolades.

Heckmann's childhood friend von der Leyen held an emotional speech in honor of the jubilee. Von der Leyen presented Heckmann with the Gustav-Rau-Medal and he also received the Golden Badge of Honor from the Verband der Züchter des Oldenburger Pferdes and the Springpferdezuchtverband Oldenburg-International as well as a bronze statute of Weihegold.

As a horseman, auction director and celebrated auctioneer, Uwe Heckmann enthused breeders, riders and patrons with his voice as an auctioneer and stallion licensing committee member for the Oldenburger Pferdezuchtverband.