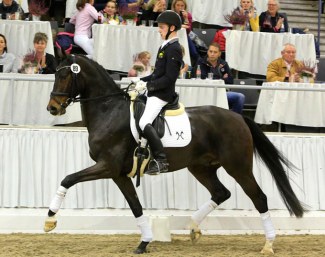 Quedez became the top seller of the 2019 Hanoverian November Auction in Verden on 9 November 2019.

Exactly 100 horses made up the big lot of the 2019 Verden Auction in November. It was the last opportunity in the 70th year of the Verden Auction to bid for a Hanoverian or Rhinelander in the Niedersachsenhalle.

With head number 89, Quedez (by Quantensprung x Sirtaki - breeder and exhibitor: Marina-Mara Tranins, Wahrenholz) was most desired. After a brisk bidding duel, auctioneer Frederick De Backer knocked down the last bid to a buyer from Baden-Württemberg for 55,000 euro.

Best paid show jumper was Dahlien (by Drosselklang II x Cheenook (breeder and exhibitor: Martina Zilinska, Dolni Domaslavice/CZE)). The daughter of the Hanoverian Stallion of the Year 2001 was worth 40,000 euro to a customer from France.

The second most expensive horse in the collection was the 3-year old gelding Beloni B (by Buckingham x Weltmeyer) which sold for 50,000 euro abroad.

In the training time of the Verden Auction in November, the interest was already high far beyond the borders of Germany. Thus 33 auction horses will be fed outside of Germany in the future. Most of those horses secured customers from France (twelve), followed by the United Arabian Emirates (five) and Great Britain (three).

The riders of the Verden Auction Team said goodbye to Jörg-Wilhelm Wegener as auction manager with a big thank you. "Thank you Jörg" was written on the back of the T-Shirts that every rider wore during the presentation of their last horse.

A sport horse at this November auction cost on average 16,510 euro.