Sezuan Not For Sale, Or Maybe? Continues Training with Kittel 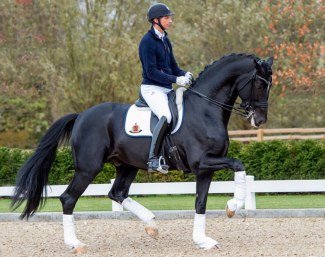 Last week some commotion arose when Sezuan fans spotted a "for sale" sign on the stallion's profile on the Gestut Peterhof website.

The triple World Champion has disappeared from the scene for almost two years now, making his last public appearance under Patrik Kittel at the Danish Warmblood Stallion Licensing in Denmark in March 2018.

Sezuan For Sale or Not For Sale?

In 2018 Peterhof announced that Sezuan would only briefly stand up for stud with fresh semen until 31 May 2018, as the focus would lie on preparing him for Grand Prix sport. However an injury shortly after Herning put Sezuan's sport career on the back burner.

In 2019 Gestut Peterhof, owned by Arlette and Edwin Kohl, announced that Sezuan would not be available with fresh semen at all in 2019, again because he is being prepared for Grand prix. That Grand Prix debut has not yet happened. The last appearance Sezuan made was on a video from June 2019 with Kittel riding the horse at Peterhof near Luxembourg

When the "For Sale" sign got noticed last week, Sezuan fans started to wonder out loud about the future of the stallion.

Eurodressage contact Arlette Kohl directly, who is known for being tight-lipped about anything that matters her stud. We asked if Sezuan is for sale, to which she replied: "no this is not my offer," but she also added, "I don't know what is in the future."

Two days later Kohl's press representative Tanja Becker got in touch and stated: "Sezuan is not for sale. He is in training and is available to the breeders via frozen semen, because he should concentrate completely on the sport."

Becker added that Peterhof would make new photos and video to give fans an update on the stallion. That video was released on 14 November showing Patrik Kittel riding the horse at Kittel's yard Eulenhof in Dulmen, Germany.

Sezuan has been training towards Grand Prix the past two years with a pause to rehabilitate from an injury.

In an interview with Tidningen Ridsport, Kittel stated: "We are slowly building him up. We're working on getting him strong enough for Grand Prix. Technically all things are in place with him (...). Even though he is still at the baby stage, you can't help but see that he has the talent."

Kittel says shows are not yet on his mind.  "I want him to be happy and develop in his body. When we feel that he is strong on all levels and also going through a test, maybe I will take him to one or two shows and just train him. If he's good, I'll start him. (...). The most important thing is that he is mentally and physically ready for the job and happy to do it. If it takes time it takes time."

The 10-year old Sezuan (by Zack x Don Schufro) has certainly proven his value as a breeding stallion, recently being declared Elite Stallion with the Danish Warmblood society.

He has sired more than 20 licensed sons and this year Secret (by Sezuan) and Queenparks Wendy (by Sezuan) won silver and bronze at the 2019 World Championships for Young Dressage Horses. Licensed son So Unique sold at the 2019 Hanoverian Stallion Licensing for 650,000 euro and became Bundeschampion as a 3-year old.

Sezuan himself was the triple World Young Horse Champion, the first horse to achieve this impressive hattrick.