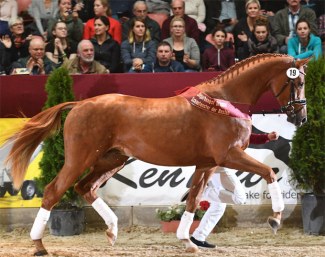 A Lord Loxley x Sir Donnerhall son was named champion of the 2019 German Sport Horse (DSP) stallion licensing that took place at the Brandenburg State Stud in Neustadt/Dosse on 14 - 16 November 2019.

A total of 53 dressage and show jumping bred colts were presented in the Graf von Lindenau arena for licensing and 18 of them were approved.

The Lord Loxley x Sir Donnerhall I colt is bred by Wolfgang Jung in Nauen, Germany, and owned by the Brandenburger state stud.

Three stallions in total were named premium. The two other premium colts were a Millennium x Hochadel colt bred by Gerhard Dieckhaus and owned by Heinrich Ramsbrock and a full brother to Belantis (by Benetton Dream x Expo'se), bred and owned by the Brandenburg State stud.

The average price for a stallion at this auction was 16,125 euro.