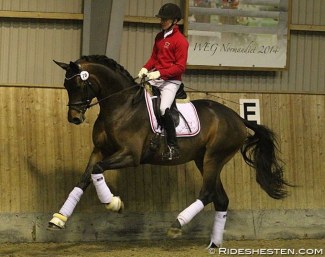 The dark bay Barcelo (by Bon Coeur x Caprimond) scored a whopping total of 914,5 points after 35 testing days and became the best scoring stallion of the 17 that passed the testing.

In Denmark young colts are provisionally approved the annual Danish Warmblood Stallion Licensing in Herning in March, after which they have to do a mandatory 10 day character test. To remain provisionally licensed they have to do a 35-day performance test either in the spring or autumn. If they successfully pass that, they will be represented as a 4-year old at the licensing in March where they can achieve a licensed status for life.

The winner of the 2019 DWB autumn testing was Barcelo who is bred by Kristine Munch Nielsen, who still owns the horse but in partnership with Helgstrand Dressage. He got 9s for rideability, 9 and 9.5 for walk, trot and canter, and 9 for potential.

The second highest scoring stallion was the 2018 Westfalian licensing champion Danciero (by Dancier x Floriscount), with 911 points. He earned 9 and 10 for rideability, between 8.5 and 9 for walk, trot and canter and 9.0 and 9.5 for potential. He is owned by Helgstrand dressage.

The 2018 Oldenburg licensing champion Global Player (by Grand Galaxy Win x Don Schufro) scored the third highest mark of 904.5 points with marks between 8.5 and 9.5 for his rideability, gaits and potential. He is owned by Henrik Hansen and Helgstrand.

The 2018 Hanoverian licensing favourite Vivino (by Vivaldi x Dancier) was fourth with 880 points. Helgstrand purchased this tall chestnut for 2.01 million euro at the licensing auction.