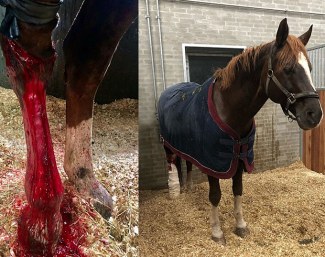 Belamour is a 15-year old stallion by Belissimo M out of La Rose (by Lord Sinclair), bred by Wilhelm Strunk, who is known for being the breeder of Isabell Werth's Bella Rose.

Belamour was originally owned by Flyinge state stud and competed by Susanne Gielen. She represented Sweden at the 2009 and 2010 World Young Horse Championships in Verden, Germany.  In 2012 he sold to the Andresen family and became Andresen's most successful horse to date.

In September 2017 Belamour was operated on for an inguinal hernia and lost one testicle. The stallion recovered but never returned to the show arena.

A few weeks ago, Belamour injured himself in a field accident at his current base, Hjortlund Horse Treatment in Esbjerg, Danmark.

During turn out he managed to get his hindleg caught in the top wire of the fence. Although the wire was supposed to snap, it didn't and got snared round the right hind leg, cutting through three tendons. He was transported to Højgård equine clinic where he was operated on.

"He kicked down the string on top of the fence and entangled it around his right hock," Andresen wrote. "Two tendons were completely severed and one 3/4 severed."

While Belamour was on the operating table the surgeons only gave the horse 30% chance of a life in retirement. Mid-operation the prognosis was dire and Alexandra discussed the matter with her mother Kirsten and their home vet Ole Jørgen Jørgentvedt who recommended euthanasia. Then the surgeons said they wanted to give the horse another chance and if he managed to get up after surgery and keep the tendons whole for 14 days, he would have a change upon a life in retirement.

"He can never be ridden again, but hopefully he will have a pain free retirement after 6 months of box rest," said Alexandra. "Not all horses can handle box rest, but Belamour can. He is not one to get stressed."

Andresen Still Struggles with Back Injury

Alexandra will not make a come back to the show ring in the near future with the other horses she has (Empire B, Borencio, Don Massimo).

She has been absent from the show ring since May 2018. Alexandra suffers from spinal stenosis, a degenerative disc disease, including two bulging discs and had to rehabilitate in 2019.

In September 2019 she slowly started riding again but it did not help her injury.  Two weeks ago she had a new MRI done of her back and there is no improvement.

"I have little hope. I'm going to a doctor in Amsterdam. I hope it can lead to something positive. Surgery is the last resort," she told Hestesport.