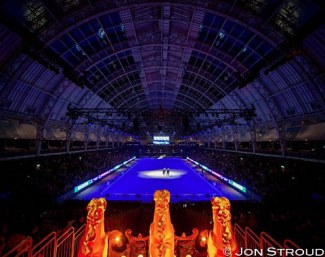 Britain’s best and most confirmed Grand Prix combinations will be gracing the Olympia Grand for the FEI Dressage World Cup Grand Prix and  Freestyle to Music  on Monday 16 and Tuesday 17 December 2019.

With the end of 2019 fast approaching, Olympia will be the third last event of the calendar year before 2020 starts and the Olympic race for Tokyo team selection starts. As Olympia is hosting the test project for a new shortened Grand Prix test, no Olympic Ranking Points can be earned in this class, making the event more relevant for competitors aiming to score World Cup qualification points to make it to the Finals in Las Vegas in April 2020.

Keen to impress the selectors will be four-time Olympian and former British number one, Richard Davison riding Bubblingh, a combination who were part of the winning FEI CDIO5* Nations Cup team in Compiègne earlier this year.  He will be joined by teammate from that event, Charlotte Fry, riding the ten-year-old stallion, Everdale.

Olympia will also welcome Lara Butler, aboard Rubin Al Asad. The combination were part of the second-placed team in the CDIO3* Nations Cup at Hickstead, where she also won the individual Grand Prix and Grand Prix Freestyle to Music titles. Rounding up a strong British contingent will be Louise Bell and Gareth Hughes, both of whom are having a career best season, having each broken several personal best scores. Hughes will not be bringing his European Championship top ride Briolinca, but is riding his second GP horse, KK Woodstock, instead.

Olympia is annually a highly British affair and the starters field of 17 athletes in total contains no less than 10 British based pairs, including Irish Dane Rawlins (Espoire) and Danish  Anders Dahl (Fidelio van het Bloemenhof and Ulrik Moelgaard (Michigan).

Following a successful summer, which included victory in the Grand Prix Special at Hickstead, Portugal’s João Miguel Torrao, a pupil of Carl Hester, will also be one to watch, riding his 10-year-old Quo Vadis stallion, Equador.