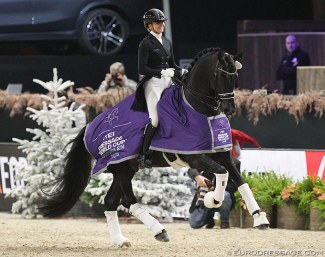 The Netherlands’ Emmelie Scholtens and Desperado took another step towards stardom with a superb victory in today’s seventh leg of the FEI Dressage World Cup™ 2019/2020 Western European League at Mechelen in Belgium, where Portugal’s Maria Caetano (Coroado) finished second ahead of Spain’s Juan Matute Guimon (Quantico) in third.

The Dutch horse-and-rider partnership who competed at this summer’s 2019 European Championships in Rotterdam (NED) have been showing rapid progress over the last few months, posting 76.283 for fourth place at round 2 of the 11-leg series in Lyon (FRA) at the beginning of November before rocketing up to 83.045 for sixth place in the Freestyle at the CDI5* in Stockholm (SWE) four weeks ago.

Today however they took it to a whole new level, scoring a personal-best 85.075 to put the result beyond doubt and raising expectations of what might be to come for the talented pair. They also topped yesterday’s Grand Prix, but the 34-year-old Dutch rider felt today’s performance was considerably improved.

“Yesterday he was a bit tense in canter but today it was so much better - he was much more confident and relaxed," Scholtens pointed out.

Spain’s Juan Matute Guimon set the bar high when putting 80.150 on the board just before the halfway break with the 13-year-old gelding Quantico. And the exciting 22-year-old rider was still out in front until Portugal’s Caetano overtook him with a great performance from her 12-year-old Lusitano stallion Coroado who scored 80.940 when fifth-last to go.

But, two horses later, Scholtens and her 11-year-old Dutch stallion threw down a spectacular performance with big marks, including a 10 for extended walk, bringing their tally beyond 85 percent which would be unbeatable on the day.

The power Desperado showed was immense, and Scholtens admitted it can sometimes prove challenging.

"I’m happy he is such a big mover, he’s always been like that and it’s a good thing it hasn’t changed with training, but when you are doing 15 one-tempi changes in a row there’s a lot of horse under you! But he’s the sweetest boy ever - he’s a stallion but he doesn’t know it and he really is the perfect horse, he’s so kind and so workable," said Emmelie Scholtens (NED).

Caetano also achieved a personal-best today and was more than pleased. “I got my previous PB here last year!” she said. And she was very proud of Coroado who flew the flag for his breed with distinction this afternoon. “It is a pleasure to present a horse bred in my country, this is special for me and I am happy to show it to the public. Now we are getting nice results with Lusitanos!” she added.

Today’s result gave third-placed Juan Matute Guimon a real boost. “To get 80 percent at the last show of the year is great! This makes me close to my big dream which is Tokyo!” said the young man who has big Olympic ambitions.

The Tokyo 2020 Olympic Games are not far from the minds of any of the riders as 2019 draws to a close.

“I’m still thinking about the best way to go for 2020”, said Scholtens who has the FEI Dressage World Cup™ 2020 Final in Las Vegas, USA next April in her sights. “I’d like to go to the Final, but Tokyo is also really important and I have only one Grand Prix horse so I’m not sure it’s possible to do both. However we are in a good rhythm now so we will compete in Amsterdam (NED) and ’s-Hertogenbosch (NED) to see if we qualify for Las Vegas, and then we’ll take it from there”, she said.

Scholtens now lies 13th on the Western European League from which the top nine will qualify for the Final. Fourth place with Sir Donnerhall today has moved French rider Morgan Barbancon Mestre into fifth on the leaderboard behind Scholtens’ compatriot Hans Peter Minderhoud in fourth and three Germans - Helen Langehanenberg, Frederic Wandres and Benjamin Werndl - at the head of affairs.

With four legs left to go, the WEL action will resume in Amsterdam (NED) on 25 January.

Text by Louise Parkes for the FEI

Photos © Astrid Appels - No Reproduction allowed
Eurodressage was on the scene in Mechelen today. if you are interested in photos for social media, send us an email