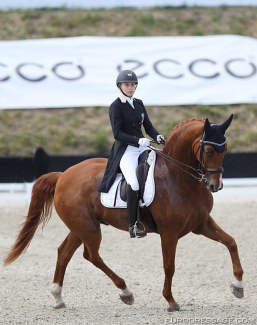 Swedish junior rider Amanda Barnestam Olsson had to say goodbye to her horse, Wall Street Boy. The chestnut was euthanized after a severe colic attack.

"It was a hard decision but it was in the horse's best interest," Barnestom told Ridsport.

Wall Straat Boy was a 2003 born Hanoverian by White Star out of Monic (by Mont du Cantal). He was bred by Siegfried Ellsell.

The chestnut gelding was previously trained and competed by Johanna Theoren and Nina Hoffmann-Kuppers.

In 2018 Swedish junior rider Matilde Illerfelt competed him at international junior riders level with starts at the CDI's in Uggerhalne, Drammen, Diepenbeek and Exloo.

In April 2019 the gelding sold to Amanda Barnestam and moved to Åhus, Sweden. The pair had a successful season at junior level in 2019 and was submitted to the Swedish potential squad for 2020. They competed at the CDI in Flyinge in September 2019, where they were fifth in the team test, 7th in the individual and 5th in the Kur.

Shortly after New Year Wall Street Boy colicked and was transported to the equine clinics in Helsingborg, where he was under observation for a few days. The colic did not disappear and the horse went into kidney failure. They could no longer operate on him and were forced to put him to sleep.

"The plan was to work towards the Championships this year and then have him as a young rider horse next year. He was still very fresh for his age, so this is such bad luck," said Amanda.

Barnestam will continue with the 9-year old mare Benicia, who recently recovered from an injury.