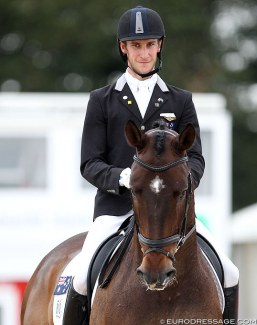 Australian professional dressage rider Jayden Brown has been hired as trainer at Willinga Park, replacing Australian team rider Brett Parbery who decided not to extend his contract into 2020.

Brown moved from his Brisbane base to Bawley Point this week and is just getting acquainted with the Willinga Park horses.

"I have just arrived with some horses from Brisbane," Brown told Eurodressage. "With the recent fires, travel was a little tricky to arrange but I’m glad to have made it to the South Coast. I’m just getting to know all the horses at the moment but I’m really looking forward to this new challenge."

Willinga Park has developed into one of the prime sites of international dressage competition in Australia and hosted several CDI's, CDI-W's and national championships.

Jayden Brown is one of Australia's stand out riders, representing his country at the 2008 Young Rider World Cup Final on Widelo and at the 2013 World Young Horse Championships on San Andreas. Aboard Furst Friedrich he claimed his first international big tour successes, competing the horse at CDi's in the small and big tour between 2012 and 2016.

In June 2017 Brown moved to Great Britain to work as head rider at Emma Blundell's Mount St John in Felixkirk, but returned to Australia at the beginning of 2019. He won silver and gold at the 2019 Australian Young Horse Championships.