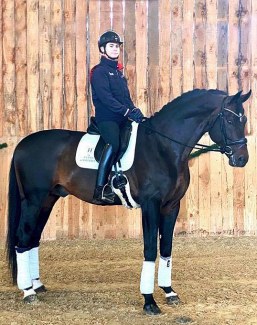 Cheret is turning 17 in 2020 and making the definite transition to junior rider level.

Alexandre began his international dressage career in the children division in 2016 aboard Seni Lloren (by Horetlano XIV x Judio V). In 2017 he combined the children's classes on Seni Llloren and Doruto (by Quattro x Zortin) with FEI pony level on Butterfly Dew Drop (by Florencio x Polaris x Harold).

In 2018 Cheret competed at only one international at pony level (CDIO Compiegne) before representing France at the 2018 European Pony Championships in Bishop Burton, where he was 33rd in the individual test. He also won the French Pony Championships.

In 2019 he combined the pony tests with his first international shows at junior level aboard Doruto and more frequently on his mother Veronique Pruede Seguret's Grand Prix horse Bamona (by United x Inspekteur). He did choose to focus on ponies though at the end of the year and returned to the 2019 European Pony Championships, this time in Strzegom, Poland, where he was 46th in the individual test. He won silver at the French Pony Championships.

Making the definite switch to horses in 2020, Cheret will have Bamona to ride as well as Haras de Malleret's 10-year old licensed Oldenburg stallion Stolzenberg (by Sandro Hit x Lord Sinclair x Welt Hit I). The stallion is bred by Paul Schockemöhle.

Haras de Malleret's Gérald Martinez stated that he wants to "support this young French talent, who is member of France Junior, because of his very nice equitation, and his shared philosophy with Malleret to always focus on the wellbeing of the horse."

The stallion Stolzenberg previously stood at stud in Germany at Gestut Famos and was briefly competed by Jessica Lynn Thomas (née Andersson) in 2015. He returned to France in 2019 to be trained by Malleret's in-house rider at the time,  Maria de la Chica Parras.