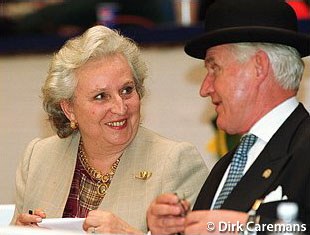 Her Royal Highness the Infanta Dona Pilar de Borbon, a former FEI president and IOC honorary member, has passed away on 8 January 2020 at age 83.

The last few years Pilar de Borbon suffered from colon cancer. She was admitted to the hospital last Sunday and passed away on Wednesday.

Born in Cannes (FRA) on 30 July 1936 to Their Royal Highnesses the Count and Countess of Barcelona while the Spanish family were in exile during the Spanish civil war, she grew up in Estoril (POR). She also lived for some time in Italy and in the Olympic Capital, Lausanne (SUI), home of both the International Olympic Committee (IOC) and the FEI.

She obtained a nursing diploma in Portugal and practised her profession for three years in a variety of hospitals. Well-known for her charitable work, she was actively involved in a number of charities, including the Red Cross, Friends of the Monasteries, Foundation for the Defence of Life, Nuevo Futuro, Action Aid, Foundation for Investigation and Training in Oncology.

At the age of 31 she married Luis Gómez-Acebo and the couple had five children, Simoneta, Juan, Bruno, Beltrán and Fernando. Tragically, her husband died in March 1991.

Her brother Juan Carlos I reigned as King of Spain from November 1975 until his abdication in June 2014, when the Infanta’s nephew took over the throne as King Don Felipe VI.

The Infanta, who practiced equestrian sports in her youth, was President of the International Equestrian Federation (FEI) from 1994 to 2006, a role that led her to becoming an IOC member in Spain between 1996 and 2006.

As well as her work in the arts and culture, she was also fluent in six languages and wrote the foreword for the official Spanish translation of the German National Federation instruction handbook, Técnicas Avanzadas de Equitación - Manual Oficial de Instrucción de la Federación Ecuestre Alemana.

IOC President Bach paid tribute to HRH the Infanta Doña Pilar de Borbón as, “an extraordinary personality in the worldwide Olympic Movement. In everything she did, her great passion for sport always shone through. I will always remember her as a kind and warm-hearted friend, who was guided by the Olympic Values with an unwavering commitment to promoting the role of sport in society,” he said.

Over the years, the Spanish royal Doña Pilar de Borbón acted as manager of the family business investments and member of several boards of directors in Spain and France.

“Doña Pilar was one of the warmest people I have ever met and was a wonderful President of the FEI for 12 years”, FEI President Ingmar De Vos said. “She was a true visionary, introducing a strategic plan to modernise the Federation and initiating a solid governance structure that was taken forward by her successor HRH Princess Haya."

"She had a no-nonsense attitude that meant she was straight to the point but always done with great humour. She will live on in the collective memory of the equestrian world forever," De Vos continued.

She always maintained her contact with the FEI, attending the inauguration of the FEI Headquarters in Lausanne in May 2011 and she was also present at the FEI Jumping Nations Cup™ Final 2016 at the Real Club de Polo de Barcelona, venue for the Barcelona 1992 Olympic equestrian events.

Well known for her charitable work, she was actively involved in a number of charities, including the Red Cross, Friends of the Monasteries, Foundation for the Defence of Life, Nuevo Futuro, Action Aid, and the Foundation for Investigation and Training in Oncology.