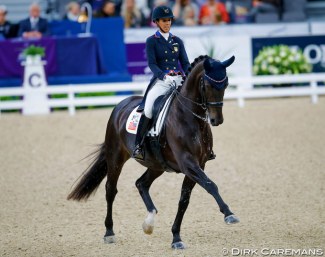 The news of the retirement of Laura Graves' Verdades cut deep into the U.S. medal chances at the Tokyo Olympic Games. Rumours have been running rife that America's nr 2 pair, Kasey Perry Dublet arere going down the same path of an early retirement, or no show, in 2020.

Eurodressage got in touch with the Wellington based Kasey Perry-Glass, who denied these rumours and said she's in full preparation for a 2020 show season start.

The 2020 American show season kicked off on 9 January with the first CDI-W in Wellington, and Perry did not enter to compete. According to the 32-year old this does not automatically means she's ruling out Wellington competitions, even though she does not indicate a starting date.

"All the horses are good. Especially Dublet," Perry told Eurodressage. "Talk of the first show is still being discussed, but we are excited about the year."

The 5* CDI in Wellington, scheduled for 19 - 23 February 2020, has been marked as a mandatory U.S. Olympic team observation trial and America's strongest Grand Prix pairs are expected to show up there.

Steffen Peters has kicked off his 2020 campaign and competed Suppenkasper in the 3* Grand Prix on 9 January, winning the class with a blow par score of 70.82%. The pair was ring rusty after their last start in Aachen last July which led to several mistakes.

America's other U.S Olympic team contender, Adrienne Lyle on Salvino, has not shown since Aachen. Lyle also has a second iron in the fire for Tokyo, Harmony's Duval.