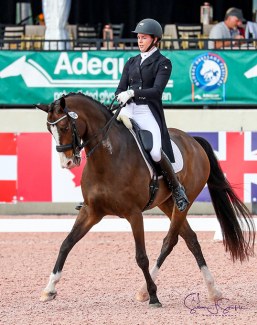 Grand Prix rider Anna Marek (USA) had been knocking at the door all week in the small tour classes and she finally broke through on Sunday to top the Intermediate I Freestyle CDI3* at the 2020 CDI-W Wellington on Sunday 12 January 2020.

Marek, who is 30, rode a challenging floorplan on the rangy and appropriately named Snoopy Sunday on the concluding day of the season’s opening week. The ambitious floorplan included flying changes out of counter-canter and the 11-year-old gelding, by the Sandro Hit son Sungold, was rewarded with 73.8%.

“Yesterday he was very spooky and I’m not sure why,” said the Ocala-based rider. “I was thrilled today after such a tough ride yesterday. He’s really not a spooky horse, but he’s not been in an arena like this and so yesterday I was a little surprised. There were just so many mistakes and he was so scared of the wind and the tent, so I was really excited that he was so good today.

“Karen Robinson put the freestyle together for me and we made it for Snoopy. She matched the music really well to his movements, and what I love about it is that I can hear the transitions into and out of the pirouette or the changes or the trot half-passes,” said Marek, who finished third in the previous day’s FEI Grand Prix Special CDI3* riding Dee Clair.

“I trust Snoopy,” added Marek, who is 6ft tall. “I trained him for the owner a couple of years ago and took him to a few small horse shows, then ended up buying him. We get along really well and I love him, although he’s actually quite small. Anne [Gribbons] told me that he was too small for me and I kept telling her that I thought he was a really nice horse. She didn’t really believe me at first, but I kept showing him to her and saying, ‘I swear this is a good horse!’ And now she believes me and loves him as much as I do.” ﻿

Chia and Dutta Get the Blue Ribbon

Ariana Chia (CAN) won the two small tour CDI3* classes earlier in the week, but in this instance had to settle for second with her own ultra-consistent gelding Fiderflame. The 10-year-old by Fidertanz scored 72.85%.

In the day’s other Intermediate I class, amateur rider Amanda Lopez contested the class on her two horses, clinching the win with her own 16-year-old Quantum, who is by the jumping stallion Quite Easy. The Swedish-bred gelding posted 66.324%.

In the day’s highest level class, the Intermediate II CDI3*, Susan Dutta (USA) showcased her and her husband Tim Dutta’s 10-year-old Hanoverian Don Design DC. A couple of niggling errors towards the end of the test subdued the score, but they finished on 69.853%, a sign of the horse’s talent.

The dark bay gelding was scouted at Hof Kasselmann in Hagen, Germany, and is by the stallion Der Designer (since gelded), who was sold as a five-year-old at the PSI auction in 2011 for €1.1 million.