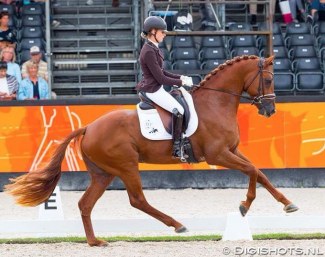 Johnny Cash is a 2014 born gelding by Capri Sonne JR out of Wyomi Utopia (by Krack C x Faust Z). He was bred and owned by Duval Horses.

The chestnut stallion was presented for licensed with the KWPN society in 2017 but rejected by the committee.  He was then gelded and continued a career in sport.

Under Dinja van Liere, he competed in the Subli Cup qualifiers and Young Dressage Talents West-Brabant competition in 2018. They were also 15th in the 2018 Pavo Cup Finals in Ermelo

"It's a pity that he sold, because he takes so much after his dad," said Dinja van Liere who competed sire Capri Sonne to bronze at the World Young Horse Championships. "Johnny Cash was a lovely horse but he will have a great time with his new owner."

Tosca Visser-Van der Meulen and her husband Cees were the former owners of Totilas. Tosca has competed Asther de Jeu at international shows from 2015 till 2019. During a routine MRI in August 2019, Asther developed complications during the anaesthesia and passed away.