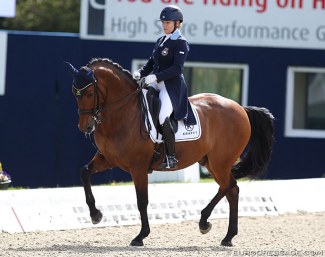 The bay was first trained competed in France by Magalie Ledoux in the young horse classes in 2009 and then trained and shown up to FEI level.

In 2013 Charlotte Haid discovered and bought Roberto through horse dealer Jochen Arl. He became her most successful Grand Prix horse to date.

Charlotte and "Robban" made their CDI debut at the 2014 CDI Vidauban in the medium tour. In 2015 they made the transition to the classic Grand Prix tour. Over the years the pair competed at major CDI's across Europe, as well as the invitational in Doha. They represented Sweden at the 2018 CDIO Nations Cup in Hickstead. Their last show was the CDI Helsinki in October 2019.

Roberto des Frettes is the second horse that Charlotte Haid has sold to Danish Lea Andreassen Torabi in a month time.

The 16-year old Torabi began competing at international pony level in 2018 with Spartacus (by Antario N x Tarzan). In 2019 she showed Andor BKO (by Hagelkruis Valentijn x Morgenland's Andor) at CDI level. In 2020 Torabi is making the transition to junior level with the  9-year old Swedish warmblood stallion Amaranth (by  Ampere x Troll x Granit), which she bought from Haid in December.

Lea's pony Andor BKO has been sold to the Haid family as an FEI pony ride for daughter Mary Sophie Haid-Bondergaard.