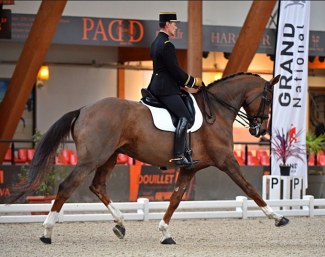 The French dressage squads are not divided into an A- and B-squad but are called Group 1 and Group 2. For 2020 a few small changes have been made to the selection criteria.

Back Paddling on Own Standards

In 2019 the FFE set new squad criteria was caused much commotion under French riders as it restricted the possibility to compete in 4 and 5* level competitions.

Halfway through the year the French federation had to back paddle on their own strictly set standards, as France did not have sufficient combinations that met the Group 1 criteria were and allowed to compete on the team at CDIO Nations Cups.

Small Changes for Dressage in 2020

In a press release sent out to the media today, the FFE announced the new criteria for 2020. For dressage some minor changes were included.

"One year after setting up Group 1 and 2 and after achieving qualification for the Olympics in the three disciplines, the FFE has evaluated the criteria with the objective of maintaining an upward progression of performing combinations in view of the Olympics," said the statement.

To be submitted to the A-squad (Group 1), riders have to score more than 70% three times at a national Grand Prix of CDI 3* of which two shows has to be at least abroad. The results have to be achieved in a period of 12 months and the most recent score can not be older than six months. For Group 2 riders have to achieve three times 68% or once 70% on the same competitions and in same conditions.

In 2019 The French Federation limited the access for riders to CDI's at 4* or 5* level, CDIO's and CDI-W to just those who have been submitted into the A-squad/group 1. However for 2020, Group 2 riders can now also compete at CDI 4* and CDI-W shows outside the Western European League.

The riders that have been submitted to the squads are: