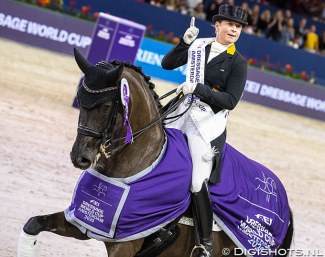 This eighth round of the 11-leg series attracted a stellar field of both former champions and rising stars, with Great Britain’s Charlotte Dujardin and her exciting mare Mount St John Freestyle finishing a close second when putting 89.505 on the board. Host nation hero, Edward Gal, lined up in third with Zonik NOP (85.385) ahead of Germany’s Jessica von Bredow-Werndl and Zaire-E (85.030) in fourth place.

But the phenomenal Werth, who holds 34 gold medals at senior level and who is chasing down her fourth consecutive FEI Dressage World Cup™ title and her sixth in total, was the only rider to break the 90 percent barrier, posting 90.280 for a performance that oozed class and confidence.

There are nine places on offer to riders from the Western European League at the 2020 Final which will take place in Las Vegas (USA) from 15 to 19 April.

This was Werth’s fifth consecutive victory at the Dutch venue, and making it all the more significant for the German superstar was the fact that every one of those wins has been recorded with the brilliant mare who also carried her to team gold at the Rio Olympic Games.

"It all started for Weihe and me when we won the World Cup here in 2016, so Amsterdam has always been a special show for us. From here we went up and up in the sport, and it’s amazing to still have have her feeling so good and motivated and engaged with me when she is 15 years old. It was a super atmosphere again today, the crowd were so emotional and they were on their feet when we finished so we really enjoyed that," said Isabell Werth (GER).

The sparkling start-list included many of the sport’s rising stars along with six previous champions. And it was Werth’s compatriot and 2013 series winner Helen Langehanenberg who held the lead at the halfway stage following a super test from her 18-year-old campaigner Damsey FRH who effortlessly executed a long series of perfect pirouettes on his way to putting 84.380 on the board.

Third in after the break however, Gal and Zonik wowed the home crowd with a dramatic test that went into the lead with 85.385. But, fourth-last to go, Werth and Weihegold changed everything when scoring over 90 percent. “It was my first time over 90 in Amsterdam but I had Charlotte coming in behind me so I had to be as good as possible because I knew she was going for it!”, said the rider who had posted a massive 90.280.

And indeed Dujardin didn’t hold back, opening her floorplan with jaw-dropping extended trot and never looking back.

"I knew I had quite a score to beat, but my horse felt good and I tried my best to give her the most confidence possible. This is only her third onsite show. Coming in today I knew I had to go for it and try my best and I was really pleased - this is the best she’s ever been," said the British rider who posted a superb 89.505 which couldn’t be beaten for runner-up spot.

The clash between Dujardin and Werth has now become the most mesmerising in the sport. Can the undisputed Queen from German hold onto her crown, or will Dujardin, who was all but untouchable during her reign with the great Valegro when she set and re-set multiple world records, eventually push her off her throne?

It is all set to play itself out as this year progresses, and with Dujardin now well-qualified for the Final in Las Vegas (USA) in April that looks set to be a cracker. Werth plans to take Weihegold once again, and should they succeed in making it four titles in a row then they will be the very first partnership to do so in the 35-year history of the prestigious FEI Dressage World Cup™ series.

Before all that however there are three more Western European League qualifiers left to run, at Neumunster (GER) in three weeks’ time where Werth again plans to compete, at Gothenburg (SWE) at the end of February and in ’s-Hertogenbosch (NED) in March.