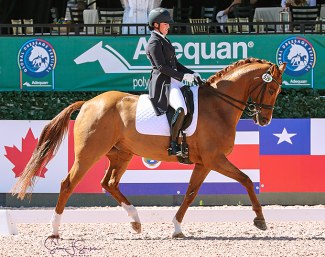 Canada’s Beatrice Boucher crowned a winning week with Louxor De Lys, icing it with a win in the Intermediate I Freestyle 3* on the closing day, Sunday 26 January 2020, of week three of the 2020 Global Dressage Festival in Wellington, Florida.

She edged out first-to-go Cesar Parra (USA) and his namesake, GK Don Cesar, who finished on 68.8% in second. Korean rider Dong Seon Kim and Bordolino’s 68.45% completed the podium line-up.

Boucher, who was named Dressage Canada's Athlete of the Year in 2018, was recording her second win of the week on breeder Lynda Tetreault’s nine-year-old Hanoverian gelding by Licotus out of a Weltmeyer dam.

“He’s quite young so we had some mistakes,” explained Boucher, who is 22 and has been riding Louxor De Lys since he was five. “He felt amazing in the warm-up and then he got tense; it’s a big ring for these younger horses. He’s a very hot horse, so there are mistakes here and there from the balance, but everything’s going to come together once he gets settled.

“We’re planning on doing the under-25 grand prix in a year or two; he’s schooling everything at home which has confused him a bit so he anticipates a little, but these are just baby mistakes and everything’s going to be confirmed with time and confidence in the ring. He is so sweet, he’s like a puppy dog and always wants to cuddle; when you want to put the bridle on, he hugs you.”

Boucher, who is based in Quebec, Canada, has 10 horses down in Wellington for the season and trains with her mother, Isabelle Ouellet.

“I’ve been training with her for ever,” she added. “It’s nice to be in a partnership like this with your mom. It can be difficult, especially when you’re a kid, but we established a line so when she’s coach she’s coach and as soon as we’re done, she’s mom.”

Susan Dutta (USA) may have been the only entrant in the Intermediaire II  3*, but the quality of her mount, Don Design DC, was not in doubt, and they earned the blue ribbon with 67.598% in their second show at AGDF 2020.

The 10-year-old son of Der Designer — a former stallion who sold at the PSI auction as a five-year-old in 2011 for €1.1 million — is out of a Sir Donnerhall dam and is owned by Susan and her husband Tim Dutta of the international horse transport business The Dutta Corporation. A year ago, the now-51-year-old grand prix rider spent her 50th birthday in hospital undergoing an emergency appendectomy.