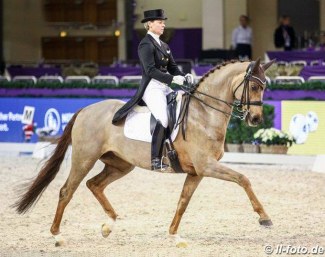 Bonita Springs, the Nurnberger Burgpokal reserve champion of 2019, has been sold to Swiss sponsor Irina Meyer as a potential Grand Prix hope for Swiss Marcela Krinke-Susmelj.

Bonita Springs is an 8-year old Rhinelander mare by Boston out of Fine Frenzy (by Fidertanz x Brentano II x Frühlingsball). She was bred and owned by Ulla Katzorke-Hellweg from Essen, Germany.

The sale already took place in the summer, even though the horse was still listed as owned by Katzorke during the Nurnberger Burgpokal finals, as well as in the German FN and FEI database.

Success from the Start

In 2015 Bonita Springs won the Hanoverian Elite Mare Show in Verden as a Rhinelander bred horse. At the time her broodmare name was Bonita Spring, without an s.

The mare has been developed to small tour level by German professional Kira Wulferding.

They transitioned to small tour level in 2019 and ended up second in the 2019 Nurnberger Burgpokal Finals, the German Championships for Developing Prix St Georges Horses, in Frankfurt.

"Bonita was tried by Marcela last year in the summer and then acquired by Mrs Meyer," Kira Wulferding told Eurodressage. "Bonita will stay with me in training."

Krinke-Susmelj has not competed internationally in two years and questions about the rider's rumoured, unfortunate ill health are not being answered by Swiss dressage officials, nor Krinke's team. Meyer did confirm that two of Marcela's Grand Prix horses are in training with Daniel Ramseier in Germany. Sonny Star was shown by Ramseier's assistant, Spanish Moises Jover Azuar, in the short Grand Prix at the 2020 CDN Ankum last weekend, scoring 66.124% to finish 12th.

For years Marcela has been Switzerland's number one Grand Prix rider on the international show scene with Atterupgaards Molberg. Marcela has four more Grand Prix horses to ride - Carissimo, Sopran, San d'Or and Sonny Star. Her last CDI start on Sopran and Carissimo was two and a half years ago, in August 2017. Molberg's last competition was the CDI-W Neumunster in February 2018. He turns 19 in spring.

Krinke is the only Swiss rider with such a large string of Grand Prix horses to ride and is greatly missed on the show scene.