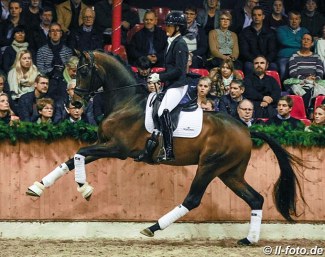 Dynamic Dream, the 2019 Westfalian Licensing Champion which sold for 1.9 million euro at auction to Andreas Helgstrand and Hanni Kasprzak, has tested positive to prohibited medication and has lost his licensed status.

The Westfalian society issued a press release on 1 February 2020 on the positive medication test and the stallion is immediately stripped of his breeding status and champion's title.

Dynamic Dream (by Dream Boy x Sir Donnerhall) was presented at the Westfalian Stallion Licensing in November by his then-owner Heinrich Giesselmann, in partnership with C. van der Laan. He was handled at the auction by German Grand Prix rider Jan-Dirk Giesselmann.

Like all 56 licensed stallions, the bay was subjected to a doping test at the approval and his results came back positive. Flunixin was detected in the stallion's blood.

"Heinrich Gießelmann was not aware of the problem, but acknowledged that the stallion was treated with a preparation containing this active ingredient prior to the licensing due to skin problems," the press release of the Westfalian society stated.

As soon as the Westfalian society received the results of the doping test, both breeder Giesselmann and owners Helgstrand/Kasprzak were informed immediately.

“I thank the Westfalian society for the openness with which this finding was dealt with," he said in the press release. "The procedure does not detract from my trust in the Westphalian Studbook, but rather reinforces it. This is how I imagine constructive cooperation."

Helgstrand will re-present the colt for licensing at the end of the month.

"Dynamic Dream will probably be presented to the licensing commission again at the end of February - and of course again subjected to a medication check," the Westfalian breed society stated.