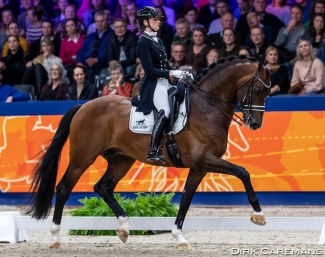 Dinja van Liere and the 9-year old KWPN stallion Geniaal became the winners of the 2020 VHO Trophy, held at the 2020 KWPN Stallion Licensing in Den Bosch on Friday 31 January 2020.

Van Liere and Geniaal (by Vivaldi x Biotop) scored a winning mark of 78.57% for their small tour level freestyle on the dressage show night at the KWPN licensing.

Dutch 5* judge Mariette Sanders-van Gansewinkel, who co-judged the class with Veronique Roerink, said, "he is a very complete horse which is the furthest advanced in its training of the four stallions. Geniaal showed beautiful pirouettes and has a wonderful self carriage in the trot work. The stallion has much frontleg technique in the tempi changes."

The second ranked stallion was Ferguson (by Floriscount x Lauries Crusador xx) who scored 76.07%. Presented by Bart Veeze, the chestnut was praised for his extensions.

Dinja van Liere also showed Germes (by Easy Game x Flemmingh) and they ranked third with 73.3%. Hermes was a bronze medal winning at the 2018 World Young Horse Championships. Unfortunately at the 2019 WCYH the stallion completely refused to go in the arena and was resistant. In Den Bosch he was back on form.

Danish 2018 WEG team rider Betina Jaeger rode the KWPN licensing champion Franklin (by Ampere x Ferro). Owned by a Danish syndicate, the dark bay stallion has been a popular breeding stallion in Denmark. This year two out of five of his offspring passed the 2020 KWPN Stallion Licensing. In the VHO Trophy Franklin underwhelmed due to tension though. He scored 72,13% to place fourth.