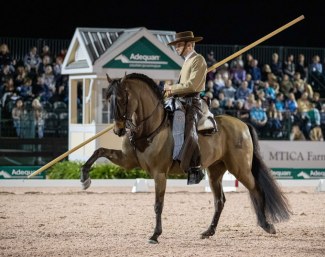 There are many events that take place during the Wellington Season, but there is one in particular that always stands out thanks to its Spanish touch, and that is USPRE Week! Every year, during the third week of Adequan Global Dressage Festival in Wellington, the United States PRE Association (USPRE) holds this exciting week dedicated solely to the PRE.

Year after year, this magical week showcases the beauty, quality, versatility, and nobility of these magnificent horses. In its tenth edition, the famous USPRE PARTY was replaced this year with attractive proposals, including varied ones designed for the enjoyment of all P.R.E. lovers.

To kick off the week, Charlotte Bredahl, US Olympian, 4* FEI Judge, member of USEF High Performance committee and National Development Coach for USEF Dressage held a Dressage Seminar with some USPRE members.

The week also featured a working equitation clinic, which is a discipline that combines the beauty and elegance of dressage, the emotion and excitement of competing against the clock, the precision of show jumping and a series of skills horses need to have when working with cattle.

Judge Doina Fischer hosted the clinic at the premises of Hampton Green Farm. Members such as Emilie Laval and Amina Sade learned a series of skills from this exciting discipline. Above all, the P.R.E horse showcased its versatility and daringness.

Later that same day was the Member’s Gala Dinner, which welcomed approximately 60 members at the Wanderers Club. Awards were presented by Tanya Duffey, Executive Director of USPRE. The 2019 USPRE End of Year Winners were:

On Thursday morning, USPRE members had the opportunity to continue learning about Working Equitation. In the afternoon, USPRE members watched the Grand Prix of CDIW at Adequan Global, which was sponsored by USPRE. US rider Olivia LaGoy Weltz (USA) and her long-time partner Lonoir won the GP with 73.435. Highlights of the dressage week include a total numer of 15 P.R.E horses were on scene ( para dressage- International arena- amateur classes and national classes).

In the evening USPRE members attended an informative and instructive round table at Hampton Green Farm with a distinguished panel of speakers. International Judges, Mariano Santos (FEI 4* Judge) and Cesar Torrente (FEI 4* Judge) along with Lorena Morales (Breeder of Yeguada Las Morerias) offered differing viewpoints regarding the movement and conformation of the modern P.R.E. Horse.

Ms. Lorena Morales made the point that, “as breeders we have a great advantage compared to the other breeds. The P.R.E horse is very reliable and has room for any kind of rider.”

Cesar Torrente praised the P.R.E and their key factor in sport: "We judge what we see. What I like the most about the P.R.E is their heart: they are willing. Their ability to collect and to sit is really a key factor."

Companion judge, Mariano Santos clarified, “my priority for a young dressage prospect is a good character and then the quality of the three paces. Dressage sport is not formula 1, we as judges have to judge every horse combination doing everything effortlessly".

Pastries and coffee were served, and breeders and attendants had a chance to mingle with USPRE representatives after the discussion.

After three action-packed days of fun, the entertainment was not over. The Board of Directors of the United States PRE Association had their annual meeting board on Friday 24th and announced the election of its new president, Janne Rumbough who will serve for the next two years. Dr. Jane Bistline and Tom Reed were elected as new Vice-Presidents of the Association.

Finishing up the schedule, USPRE Week continued with Friday Night Freestyles. Warming up the P.R.E engines, Kerrigan Gluch and Bolero CXLVIII (by Utrerano VII x Felina XVIII) opened up the night with a very patriotic dance on the sound of ‘Living in America’ by James Brown.

Under an electric atmosphere, the big excitement of the night came during the break. Tom Reed, USPRE Board member and former head trainer of Medieval Times, exhibited the beauty and movements of the PRE horse. Tiberius LE, owned by Francesca Nicoletti, and captivated the audience with its big paces and beautiful long mane.

Next, whistles and shouts of triumph accompanied the Andalusian rider in each movement of his Doma Vaquera routine. Under the sound of “Entre Dos Aguas “de Paco de Lucia, Francisco Miguel de Rooij riding Brio HGF entertained the dressage audience with an entire section involving Passage, piaffe, paso español, canter pirouettes with la Garrocha. Performing one- time changes with only one hand on the reins and the other holding the garrocha, Francisco delighted the spectators, who roared into applause, shouts and ovations towards the Spanish rider. Last but not least, Maria Lithander concluded the USPRE exhibitions with her FEI mount Barbara HGF and a lovely dressage freestyle

U.S. rider Olivia LaGoy Weltz produced a personal best and came home with the blue ribbon. Her golden score of 80.495 honored her the first place of the FEI Grand Prix Freestyle CDI-W.

Putting the PRE in the Spotlight

The final activities on Saturday mesmerized the audience with a three time presentation: a little glimpse of Working Equitation under the reins of Doina Fischer riding Illusione Di Ferrari (by Cariñoso CCXXXV X Ventanera IV), a Spanish exhibition presented by Francisco Miguel de Rooij and a dressage performance by Amina Sade with Fiti Al (by Jondo x Lavanda II)

Each year, USPRE week congregates in Wellington with the best riders and breeders on American soil, as well as international guests. We thank all participants in this year’s 10th Annual USPRE Week and hope to see both new and old faces next year at this truly remarkable and world-premiere event.

For more information about the USPRE, visit www.usprea.com