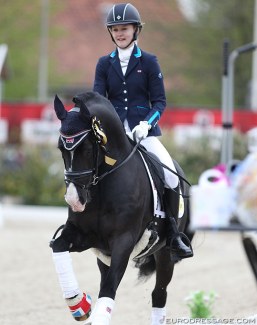 The British dressage team pony Valhallas Zorro has been sold to Louise Hooijen from The Netherlands.

Valhallas Zorro is an 11-year old pure bred Welsh pony stallion by Valhallas Lord Matrafal out of Valhallas Hazel (by Fjordglimts Sir Johnson). He is bred by Carl Trock in Denmark.

In 2016 Zorro moved to the United Kingdom as Holly Kerslake's new ride. The pony was co-owned by Trock and the Kerslake family.

Holly and Zorro had their CDI debut at Keysoe in March 2017. The pair went on to compete in Sint-Truiden and Roosendaal and were selected on the British team for the 2017 European Pony Championships in Kaposvar, Hungary, where they won team bronze and were 24th in the individual test.

In 2018 CDi's in Sint-Truiden and Hagen followed, but they were first reserve for the European Championship team. Kerslake and Zorro returned in 2019 full force and campaigned at Keysoe and Saumur to reclaim their spot on the British pony team.

At the 2019 European Pony Championships in Strzegom, Poland, they were 20th in the individual test and finished fourth with the team.

Valhallas Zorro was advertised for sale on Eurodressage's Equimarket and has now found a new owner in The Netherlands.

"Valhallas Zorro was advertised for sale, which caused a lot of interest from different European countries," Trock told Eurodressage. "With his ability to constantly score above 70 % in top company he has been seen as one of the most consistent ponies on the circuit. The outcome is that Valhallas Zorro soon will move to a family in the Netherlands, where he will be ridden by their 14-year-old daughter."

The new owner and rider is Louise Hooijen, who trains with former Dutch U25 rider Sanne van Grotel. She previously competed the New Forest Pony Ace DBB (by Samba Boy x Priory Prickle) at M2-level in The Netherlands.