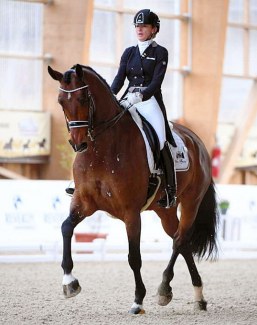 Dion Johnson was a 12-year old Dutch warmblood by Johnson out of Vinea M (by Ferro). He was bred by Claartje van Andel.

The horse was first competed by Van Baalen's assistant trainer Lisanne der Nederlanden as a youngster.  They won the 2014 Subli Cup Championships for 4-year olds and a silver medal at the Dutch Championships at Z2 level. They went on to win silver at the 2015 Dutch Indoor Championships at ZZ-level.

In 2015 Marlies van Baalen took over the ride and they made their international show debut at the CDI Le Mans, where they won all three small tour classes. They also won silver at the 2015 Dutch Championships at small tour level.

In 2016 they continued to compete at small tour level in Drachten, Darmstadt, Odense and Roosendaal Indoor and they scored gold at the 2016 Dutch Indoor Championships. Dion Johnson was not competed internationally in 2017 and his return to the arena took until August 2018. At the CDI Cappeln they earned a first and second place.

In February 2019 Marlies and Dion Johnson moved up to medium tour level and competed in the Intermediaire B and II at the CDI Le Mans, where they were first and second. It was their only CDI of the year as an injury kept the horse sidelines.

Dion Johnson, who is a full brother to Marlies van Baalen's B-squad listed Grand Prix horse Ben Johnson, was back in full training for his Grand Prix debut under Coby van Baalen, as Marlies got injured in September.

Last weekend, the horse had an accident in the stall and fractured his pelvis. Despite thorough veterinary care he could not be saved and was put to sleep.

"He was special, from the start, because of his extremely sensitive character," said a saddened Marlies. "He was super talented and the sensitivity turned out for the good and gave you a fantastic feeling in the saddle. He was powerful and sensible at the same time. I thoroughly enjoyed working with him. He won with much pleasure. The battle of the past few days he unfortunately couldn't win. We'll miss him dearly."