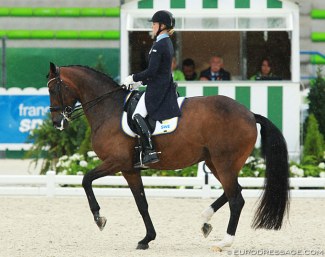 Darcia VH, a Swedish team horse at the 2014 World Equestrian Games in Caen, France, has passed away on 10 February 2020.

Darcia VH was a 16-year old Swedish warmblood mare by Danone I out of Dakarta (by Don Schufro).

She was bred by Birgitta and Torsten Hansson in Sweden and owned by Jeanna Hogberg in partnership with the breeder.

Darcia VH was first started by Pernilla André-Hokfelt in 2008 and they were 14th in the 3-year old division at the Swedish Young Horse Championships.

In 2009 a new rider climbed on board, Mattias Jansson, and he placed 14th in the consolation finals with her at the Swedish Young Horse Championships that year.

In 2010 it was Jeanna Hogberg turn. She took over the ride and landed 10th place in the finals at the 2010 Swedish Young Horse Championships.

Darcia VH became Hogberg's career making dressage horse as they were the rookie pair on the Swedish team at the 2014 World Equestrian Games in Caen, France.

The pair made its international show debut at the 2013 CDI Vidauban at small tour level.

The pair went on to compete at Rotterdam and Aachen to secure their WEG team ticket. At Cean they finished 39th in the Grand Prix with 69.657%.

The same year Hogberg went on to compete in the World Cup Qualifiers after Caen and rode at Odense, Stockholm and Mechelen. The event in Belgium in December 2014 was their last together

2014 was Darcia's one and only year at Grand Prix. The mare was considered one of Sweden's highest potential Grand Prix horses at the time.

After Mechelen, Darcia VH sustained a severe injury and she spent numerous months at an equine clinic and rehabilitation centre in Belgium to recover. She was picked up in August 2015 but on her return home to Sweden, she foundered with laminitis.

"My amazing mare Darcia VH passed away today," Hogberg took to Facebook. "This amazing mare who took me to the World Equestrian Games in Caen. She was the kindest, sweetest most wonderful horse with a talent for piaffe and passage that was out of this world! But most of all I will remember her kindness and soft nose. She was in foal with D’avie but he (I imagine it was a colt) followed her to heaven. Rest in Peace wonderful Darcy!"

In an interview with Ridsport, Hogberg added that, "she was in too much pain and had to be put to sleep in peace and quiet."

Hogberg did not want to reveal to Ridsport, nor Eurodressage, the cause that prompted the euthanasia.