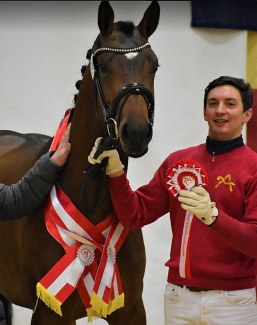 A total of 48 stallions participated in the licensing and they were divided into groups which included young dressage and jumper colts, older stallions and pony stallions. The stallions were measured and presented on hard surface, shown in freedom, and presented in hand.

The champion of the dressage colt collection, which included stallions born in 2016 and 2017, was Traunstein K.

Traunstein K is by the Hanoverian Toto jr out of KWPN mare Candice (by United x Belisar). He is bred and owned by Wolfgang Kromoser from Oberndorf, Austria and he celebrated not only the champion's title that day, but also his birthday. The colt was also presented at the pre-selection for the 2020 KWPN licensing, held in Ermelo in December, but not accepted for the licensing in February.

The Austrian Warmblood licensing committee described the champion as a "harmoniously, and very athletically built stallion with excellent gaits that convinced with their power and dynamics."

The reserve champion was the Oldenburg bred Fürst Otto (by Furstenall x Don Schufro), bred by Otto Mucker and owned by Martina Winter.

The champion of the pony stallion lot was the buckskin Notting Hill (by FS Numero Uno). The German riding pony bred colt is bred by ZG Nagel and owned by Johanna Siebenhandl.  Three further pony stallions were approved. The reserve champion was Bergerhof's Domino (by D-Day), bred by Heike Gier and owned by Frank Doppler.

There was also an assessment for 2.5-year old colts and the winner was the 2017 born Maximums (by Millennium), bred and owned by Gerhard Resch.