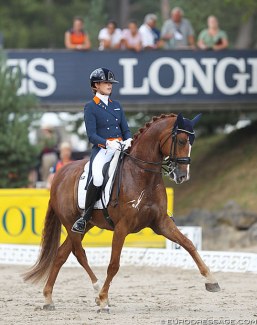 After less than one year in the ownership of German junior Luca Sophia Collin, the former Dutch medal winning youth team horse FS Las Vegas  has been sold to a new rider.

He was first competed in 2010 by Jana Freund and she took him up to L-level in three years. In 2013 Dutch pony rider Febe Van Zwambagt and made the transition from ponies to junior level with him.

The chestnut proved quite a challenge for Febe van Zwambagt at the start with his temperament and it made their rise up the levels and the score board not going in a smooth line upwards. It also led to the horse getting gelded.

When the combination started to show continuity and reliability they were selected to represent The Netherlands at the 2016 European Junior Riders Championships in Oliva Nova, Spain, and won team silver and Kur gold. In 2017 they were not selected, but in 2018 they returned on the team for the European Young Riders Championships in Fontainebleau, and won team silver, individual test silver and kur bronze.

In March 2019 FS Las Vegas sold to German junior rider Luca Sophia Collin, but the pair has only competed at four local shows that year.

Collin and "Lassie" made their show debut at the local event in Mettmann in April 2019, but three weeks later it was her home trainer Jochen Bender who started showing the chestnut; first in Mülheim, then Düsseldorf.

Luca returned in the arena in Neuss and Dinslaken at the end of May and June, while Bender campaigned him in the summer of 2019.

The horse's last show was under Collin in September.

FS Las Vegas has now become the ride of German junior Emma Caecilia Lienert, who is trained by the Frenzen family in Krefeld, Germany, since 2018.

The 16-year old Lienert made her international show debut at the Future Champions CDIO-PJYR in Hagen in 2017. She rode in the Children's division with Birkhof's Denario (by Denaro x Fairplay) and was named team reserve for Germany for the 2017 European Children's Championships.

In 2018 and 2019 she rode at three internationals, the Aachen Indoors twice and the CDI Exloo, at junior level with the 9-year old Rhinelander mare Lady Carnaby (by Lord Carnaby x Ehrentusch).

"I will take part in the next training course as a qualification to ride the 2020 Preis der Besten trial," Lienert explained. "I'm really happy to have such a horse as FS Las Vegas to ride."