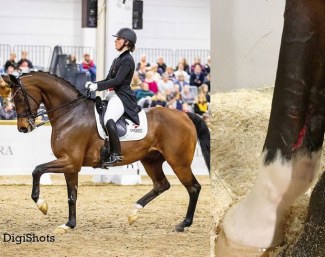 For Danish Olympian Anna Kasprzak the competition weekend in Lillestrom, Norway, became a roller coaster. After winning their international Grand Prix debut, she had to withdraw her new ride from the Freestyle due to an injury.

In November 2019, Anna's mother Hanni Toosbuy Kasprzak, ceo of shoe multinational Ecco, purchased the 11-year old Russian warmblood Fuhur (by Furstenreich x Nagnat) for Anna to have an Olympic hopeful at the ready for Tokyo. The horse was previously trained and competed by Russian Elena Sidneva.

At a national show in Hedensted, Denmark, on 2 February 2020, Kasprzak and Fuhur made their show debut and won the Grand Prix class with 74.467%.

The 2020 CDI Lillestrøm was the pair's international debut and in a field of 11 riders they took the victory with 71.587%

Unfortunately the next day the pair had to withdraw from the freestyle as the horse injured himself overnight in the stall.

"He was rolling in the stable and got his hindleg stuck in between the bars," Anna explained. "He pulled of his shoe and got a big skin scratch. Hopefully it is only superficial but we will make a scan next week."

The horse sustained a superficial scratch but will be checked if there is no further injury.