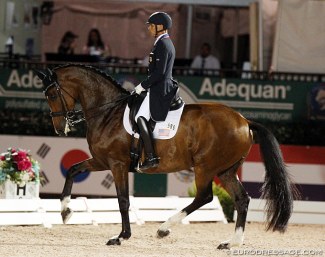 It was a bonanza day of grand prix level action on the second day of week seven of the 2020 Global Dressage Festival (GDF) in Wellington, Florida on 20 February 2020. There were four classes contested at the level, two three-star classes, and two five-star. AGDF 2020 runs for 12 weeks, through March 29.

In the five-star ranks, it was Steffen Peters (USA) who topped the Grand Prix 5*, which was a qualifier for the Grand Prix Special 5* on Saturday. The 55-year-old California-based rider rode Suppenkasper to their third highest career grand prix score, leading the field of 12 with 76.239%, just 0.63% shy of their best ever in this test, which they laid down in GDF week five. The pair is unbeaten in their seven starts so far this year.

Both second-placed Sabine Schut-Kery (USA) and Canada’s Brittany Fraser-Beaulieu posted identical scores on the board of 73.674%, so the standings were decided by the only collective mark. Schut-Kery’s rider mark on Sanceo was higher than Fraser-Beaulieu’s on All In, shoring up the final placings.

Peters, whose bond with Suppenkasper, Four Winds Farm’s 18.2hh gelding by Spielberg, is going from strength to strength, said: “He was great, even more relaxed than last time. I rode the first pirouette just a tiny bit too late and then I didn’t have enough time to prepare the change at X so it got a little crooked and it wasn’t a good score. The rest was very clean.

“The passage and piaffe felt better. I’m able to ride the piaffe a little bit more in place. Debbie [McDonald] and I have been working on it. That’s been so much fun. It’s amazing the work and the collaboration with Debbie here in Wellington. She deserves a huge part of that 76%.”

He elaborated on the training the pair have been doing on Suppenkasper’s piaffe, adding: “He’s so eager to go forward. The horse has so much tremendous power, there was not a single moment where I was pushing him. His desire, even in the piaffe, is to go forward. So I ride it – I do five or six steps, and then I halt. Instead of leaping forward into trotting or running into the passage, we halt or even rein-back and say, ‘Listen buddy, we stay here a little longer.’ That wasn’t possible even six months ago, so it’s a huge step ahead.”

Schut-Kery showed tremendous improvement from her and Sanceo’s only other grand prix test of 2020, improving from 65.9% to over 73% with Alice Womble’s elegant stallion which she has been riding since he was three.

“He was really on it today and with me,” she said. “I could bring him back whenever I wanted, and I could go forward when I wanted. There’s always obviously tons of stuff to improve, so I’m excited to get going to get things even better. This horse is amazing. Every year he has given me something, which is quite amazing.”

Third-placed Fraser-Beaulieu described her test as “the best test I’ve ever done,” adding: “I was so happy! It was the best test by far. He went out there and he rocked it. He was with me every step of the way. The piaffe/passage can be a little tricky sometimes, especially when he’s fresh. But he really likes it here under the lights. It gives him more power and I couldn’t ask for more of him tonight.”

All three riders have their sights firmly set on the Tokyo Olympics at the end of July.

The USA’s Katherine Bateson Chandler started her 2020 season with a bang winning the Grand Prix 5* and leading the charge into Friday evening’s duo of freestyle classes. She rode Jane Forbes Clark’s 15-year-old Contango gelding Alcazar to 71.935% to scoop the winner’s sash and cooler. She was joined on the podium by Susan Pape (GBR) riding Harmony Sporthorses’ 13-year-old Harmony’s Don Noblesse to 70.587%, with the Dominican Republic’s Yvonne Losos De Muñiz just 0.065% behind on her own Aquamarijn.

Bateson Chandler, who had not competed Alcazar since September 2019, said: “I’m really happy because it's a bit scary not having shown for a while and the first show being a five-star, but I really wanted to get him in this class. It was brutally hot out there, so to put in a basically clean test in that heat, I’m super proud of him.

“He’s really trying so hard for me now and that’s all we can ask,” added Bateson Chandler, who has ridden Alcazar at international grand prix for five years, having made his debut at GDF in 2015. “I’ve had to have a bit of faith and trust in him now because we’ve done this enough to know that we know each other well enough that we can pull it out.

“My preparation has been a slow build,” she added. “This is a long season and we have a long way to go for our qualifications to Tokyo, so I didn’t want to come out too early. Our qualification system is quite intense and quite long, so we wanted to be a bit careful.”

The pair are planning to compete in GDF week 10 (March 10-15), the Nations Cup week, then return to the UK to trainer Carl Hester’s base, where they spend the summers, and “then really start to kick into to high gear.”

The top three in the Grand Prix 3* all broke the 70% barrier. It was the last to go of the 22-strong class, Canadian rider Megan Lane, who captured the win. She posted 70.935% on Zodiac MW, Deer Ridge Equestrian’s 16-year-old KWPN gelding by Rousseau. She pipped the Japanese rider Masanao Takahashi into second place. He rode Rubicon, who at 17 years old was the equal oldest horse in the class, to 70.87% — just 0.065% behind the leading score.

Ashley Holzer (USA) made a busy day worthwhile. She filled third place with 70.261% in the three-star grand prix for special on Diane Fellows’ rising star Mango Eastwood, and topped off the day with second place in the FEI Grand Prix CDI3*, presented by Wellington Equestrian Realty, riding Diana Rose’s 14-year-old Radondo, by Blue Hors Romanov, to 67.261%. He was competing in only his second international show at the level.

It was Japan’s Kiichi Harada and his long-time ride Egistar — Hanuka Taguchi’s 17-year-old KWPN gelding by Cabochon — who captured the class with 68.239%. Kelly Layne of Australia completed the rainbow of flags on the podium, finishing third with 66.109% on her own 11-year-old Sir Donnerhall gelding, Samhitas.

In the Prix St. Georges CDI3* Karen Pavicic (CRO) piloted the equal youngest horse in the field to top honors. She and her own eight-year-old Totilas gelding Totem put an unassailable 71.078% on the scoreboard, edging out second-placed Luuk Mourits (NED) who scored 70.245% on Don’t Stop The Feeling, Harmony Sporthorses’ 11-year-old gelding by Don Primus. Ida Mattisson (SWE) on Edison Van Twinwood rounded out the podium with 69.853%.